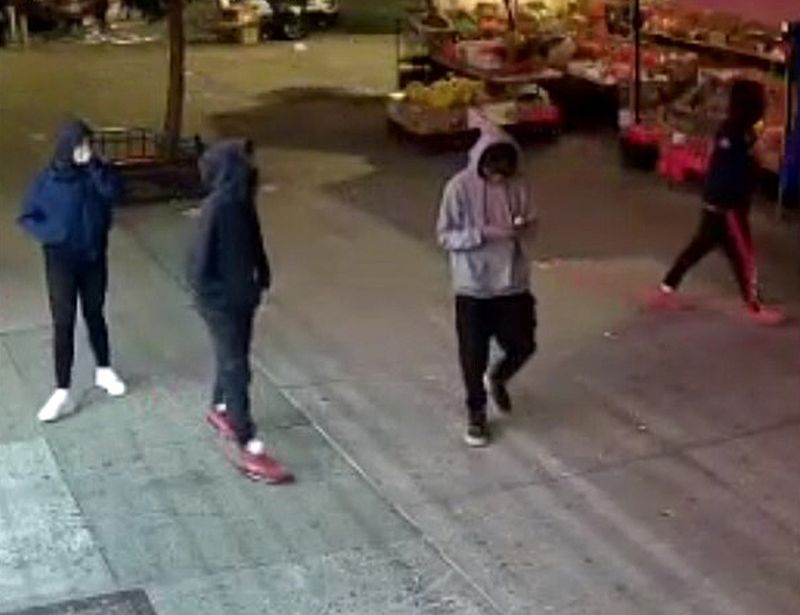 A group of youngsters are wanted for randomly shooting two people point-blank in the face with a BB gun in the Bronx — a spree reminiscent of a notorious “Knockout Game” nearly a decade ago, police sources said.

The group targeted a 73-year-old woman working at a fruit stand and a city subway conductor — and police Wednesday released video of one of the attacks in the hope someone recognizes the suspects.

The video shows the group’s first attack about 10:50 p.m. Nov. 3 on White Plains Road at E. 219th St. in Olinsville. Four suspects are seen lurking behind a fruit stand for a few moments, then attacking the woman working inside. One youth, dressed in a gray hoodie, pulls out a cell phone and starts recording, while an accomplice in a dark hoodie walks up to the victim, points and shoots.

The victim suffered a cut to her face. Medics took her to Jacobi Hospital in stable condition.

“It’s like a Knockout Game, but with a BB gun,” said one police source, referring to a trend where attackers try to knock out a stranger with a single punch. Cops responded to 10 possible “Knockout Game” attacks in 2013.

One person started recording with a cell phone, while another shot the 37-year-old subway conductor in his face through the train’s open window. The shot cut the conductor’s face, and he went to Jacobi Hospital as well, in stable condition.

Police ask anyone with information to call Crime Stoppers at (800) 577-TIPS.