‘Some fatalities’ and more than 20 people injured, including children, after SUV plows into Christmas Parade in Waukesha, Wisconsin 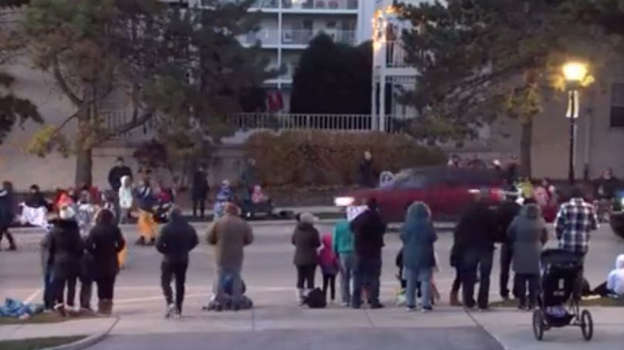 The driver of an SUV crashed through barriers and plowed into a Christmas parade in Waukesha, Wis., Sunday evening, fatally running over marchers and injuring 20 others, including children, authorities said.

Waukesha Police Chief Dan Thompson said there were “some fatalities” but would not give an exact number, as they were still working with the medical examiner to identify the victims and then notify families. A person was in custody, he said at an evening press conference.

A marching band was playing “Jingle Bells” Sunday afternoon as the popular traditional parade wound through downtown Waukesha, about 20 miles west of Milwaukee, when the SUV came out of nowhere and barreled through, terrifying social media video showed.

Thompson confirmed more than 20 people had been injured after the driver of the red SUV sped through the parade.

He also said an officer had fired shots to try and stop the car after it broke through the barriers, and that no bystanders had been injured from the discharge. “It’s an ongoing investigation,” Thompson said in a three-minute briefing.

Police have located the vehicle and identified a “person of interest,” he said.

At 7 p.m. police issued a shelter-in-place order, urging people to avoid the downtown area within a half-mile radius as they continued the investigation.

Those injured appeared to include children, members of a marching band and a dance troupe, according to witnesses and videos of the incident posted online. Police withheld their identities as they notified next of kin.

A video taken along the parade route showed a group of what appeared to be teenage girls dancing with white pompoms and wearing Santa hats. The SUV plows into the group as the person filming shouts, “Oh my God!” over and over. The video shows people tending to at least one of the girls on the ground.

“There were pom-poms and shoes and spilled hot chocolate everywhere,” Waukesha school board member Corey Montiho, whose daughter was in a youth dance team that was hit, told the Milwaukee Journal Sentinel. “I had to go from one crumpled body to the other to find my daughter. My wife and two daughters were almost hit.”

Another video shows the SUV striking what appears to be members of a marching band and several others along the parade route before driving on. The sound of the marching band heard before the SUV approaches is replaced by screams.

One video posted on Twitter showed a speeding red SUV careening alongside marchers and barely missing a little girl whose back was to the street as she danced to the drums and music.

“As we were walking back in between the buildings that we saw an SUV cross over, just put the pedal to the metal and just zooming full speed along the parade route,” he said. “And then we heard a loud bang, and just deafening cries and screams from people who are struck by the vehicle. And then we saw people running away or stopping crying, and there are people on the ground who looked like they’d been hit by the vehicle.”

The parade is a cherished annual event that kicks off a season of holiday merriment, the Journal Sentinel noted. This year Waukesha is celebrating its 125th anniversary.

Waukesha schools were closed on Monday as administrators determined how best to cope with the tragedy.

“At this time, we are working with the police department to more fully comprehend all of the tragic details of this unfortunate event,” Superintendent of Schools James Sebert and Deputy Superintendent Joe Koch said in a Facebook post Sunday night. “As a result of this situation, school will be canceled on Monday, November 22, 2021, for all students in grades 4K – 12. Additionally, the District will have additional counselors available during the school day at all buildings for all students that may be in need of support services.”

They said a decision about Tuesday would be made on Monday, and promised additional counselors during the day at all buildings for any students who may need support.

“Our thoughts are with everyone impacted, with all who witnessed the event, and with our entire community,” they concluded.

“Tonight was a traumatic situation for the city of Waukesha,” Mayor Shawn Reilly said at the short briefing.

“Kathy and I are praying for Waukesha tonight and all the kids, families, and community members affected by this senseless act,” he said in a statement. “I’m grateful for the first responders and folks who acted quickly to help, and we are in contact with local partners as we await more information.”