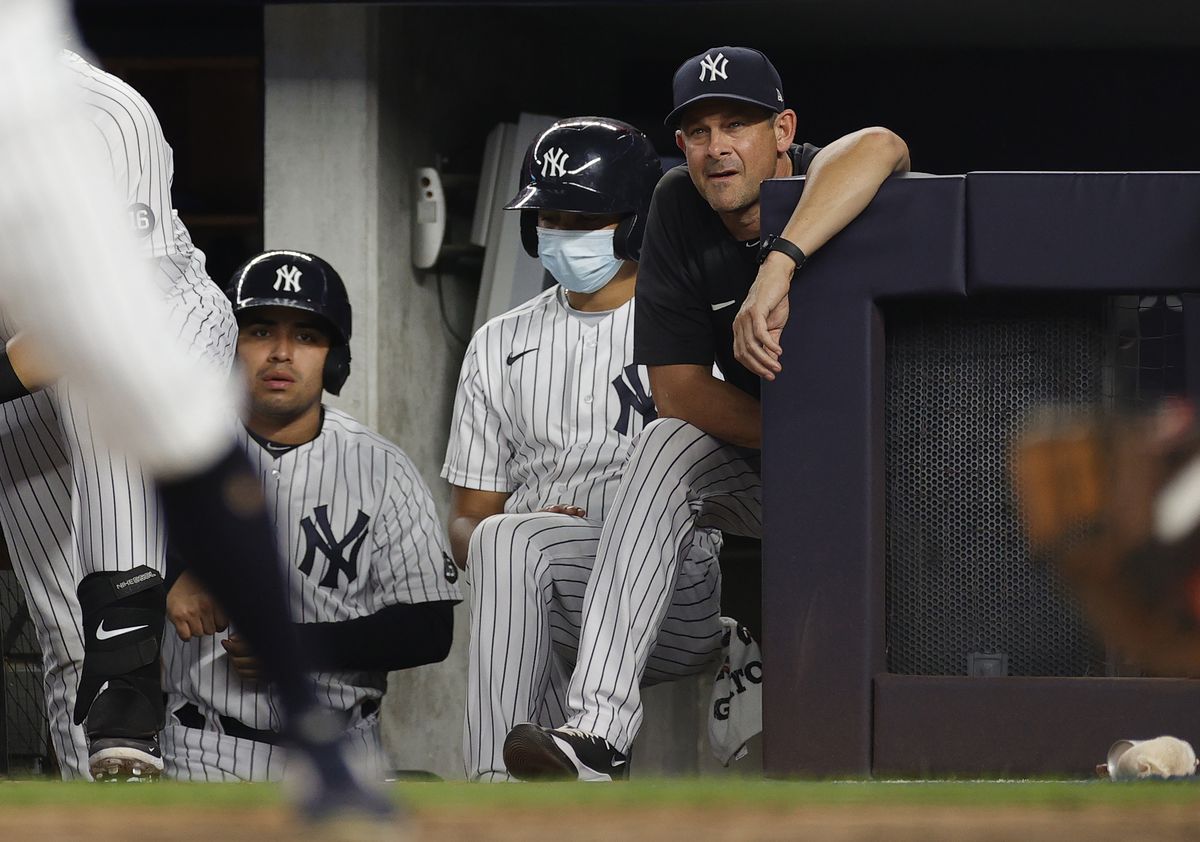 Aroldis Chapman is now a problem. Handed a four-run lead in the ninth inning Wednesday night, the Yankees closer blew it. Chapman and Lucas Luetge gave up seven runs in the top of the ninth as the Yankees suffered their worst loss of the year, falling 11-8 to the Angels in a rain-delayed game at Yankee Stadium.

It was the fifth loss in the last six games for the Yankees (41-39), whose GM said “we stink” just a day ago. They are continuing their inconsistent play, hovering around the .500 mark and digging themselves out of contention for a playoff spot.

But this loss was the worst of the year to date.

“It’s about as bad as it gets right there,” Giancarlo Stanton said.

It began with a bang, the Yankee bats chasing Angels’ two-way sensation Shohei Ohtani out after allowing seven runs on two hits and four walks in the first inning.

And ended with a whimper.

Wednesday, Chapman walked the first batter he faced, throwing just one strike, but he went to a full count on both Max Stassi and Anthony Rendon but could not finish them off. That set up the game-tying grand slam for Jared Walsh. Lucas Luetge gave up three coming in relief of Chapman.

Boone does not think it’s an issue.

“Look I think a lot of them have been different,” Boone said of Chapman struggles. “We go back to the Minnesota one (where he gave up a career-high two home runs), then we go back to one of the ones where he had the finger (nil issue) a couple intermixed there where I thought he was pretty sharp,” Yankees manager Aaron Boone said. “Today, he just struggled obviously finding the zone so you know the in and credit the angels work some good at bats against them and then obviously a big swing so frustrating disappointing terrible you know, we get we got to pick ourselves up.

Chapman was booed off the mound by the few fans who remained at Yankee Stadium after just over two hours of rain delays.

The Yankees sat on those seven runs that they got off Ohtani for the next seven innings, before Brett Gardner hit his third home run of the season — which seemed like a tack-n run at the time, but ended up being necessary.

“A terrible loss,” Boone said. “We continue to have good at bats and give ourselves chances to blow the game open and couldn’t get it done. So we let them hang around enough and then it was obviously a struggle there in the ninth.”

It’s not just Chapman who had a rough time of late.

Domingo German allowed three runs on three hits and three walks in three innings of work. His night was ended by the 42-minute rain delay, but Aaron Boone had his bullpen going before the rains came.

German has allowed 17 earned runs over 15.1 innings pitched in his last four starts. The slight 28-year old has racked up 76 innings this season, after having missed the entire 2020 season serving his 81-game suspension under the MLB/MLBPA joint domestic violence policy. Even back in 2019, when German had his breakout 18-win season going until he was suspended, there was concern about his durability. He was gassed in the second half of the season and was being transitioned to the bullpen for the playoffs when he was suspended.

“This one definitely hurts,” German said.

The offense, which has been wildly inconsistent, has had to carry them. Wednesday night, Brett Gardner hit his third home run of the season, Stanton had two hits and DJ LeMahieu had three RBI. They got seven walks from Angels pitchers, including four from Ohtani.

With the calendar flipping to July, the Yankees have to find a way to turn this around quickly.

“We’ve got to pick this sh-t up,” Stanton said.