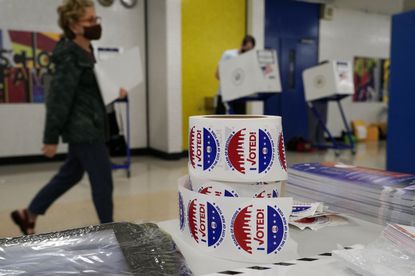 Eric Adams’ lead in the city’s Democratic mayoral race is even slimmer than initially thought — with runner-up Kathryn Garcia trailing him by less than 15,000 ballots, according to corrected results released by the Board of Elections on Wednesday after an embarrassing tabulation snafu plunged the primary into chaos.

According to the updated unofficial returns, Brooklyn borough president Adams clinched the top spot with 51.1% of the vote after nine rounds of ranked-choice eliminations. Garcia, the city’s former sanitation commissioner, was the only other candidate left in the race after the ranked-choice rounds, capturing 48.9%, according to the BOE results.

That’s the same percentual margin as was displayed between Adams and Garcia in results released by the BOE on Tuesday that have since been withdrawn because the board admitted it had accidentally included 135,000 “test” ballots in that count.

In a remarkable twist, Adams leads Garcia by 14,755 ballots in the new tabulations — less than the 15,908-vote margin he held in the first botched count.

Despite the tightening race, Adams voiced confidence that he will prevail once nearly 125,000 outstanding absentee ballots are counted.

“There are still absentee ballots to be counted that we believe favor Eric — and we are confident we will be the final choice of New Yorkers when every vote is tallied,” said Adams, who held a nearly 10% lead before the ranked choices came into play.

The absentee ballots won’t be counted until July 6 at the earliest, leaving New Yorkers in limbo again as BOE tries to determine who will become the Democratic nominee to replace Mayor de Blasio.

Garcia said she’s likewise optimistic about the absentees. But she also asked for patience from New Yorkers.

“While we remain confident in our path to victory, we are taking nothing for granted and encourage everyone to patiently wait for over 124,000 absentee ballots to be counted and included in the ranked-choice voting tabulation,” Garcia said.

Former de Blasio counsel and progressive standard-bearer Maya Wiley, the only other serious contender left in the race, trailed Garcia by a measly 0.1% — or 347 ballots — when she was eliminated in the ninth ranked-choice round.

With that nearly non-existent margin, Wiley could very well still be in play once the absentee ballots factor in, and she said she’s not conceding in light of the updated results.

“With more than 120,000 absentee ballots left to count — in addition to provisional ballots and potential recanvassing of results — this election is still wide open,” Wiley said.

Overshadowing the nail-biting results was Tuesday’s chaotic mistakes by the BOE.

Along with the updated results, the BOE’s commission, which is made up of Republicans and Democrats, issued a public apology, in which they blamed “human error” for its failure to remove dummy ballots before running the count of what marks the first ranked-choice election in city history.

“Yesterday’s ranked-choice voting reporting error was unacceptable and we apologize to the voters and to the campaigns for the confusion,” the 10 commissioners said in a statement. “We have implemented another layer of review and quality control before publishing information going forward.”

Election experts were stunned that the BOE didn’t detect the test ballot mistake before it was too late, noting that even a basic tabulation check would have shown that Tuesday’s vote total was off.

The winner of the Democratic mayoral primary will square off against longshot GOP challenger Curtis Sliwa in November’s general election.