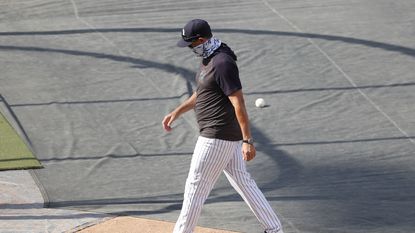 After a night of waiting here for the results of the Phillies COVID-19 tests, the Yankees packed up and went home. The second game in the two-game series was postponed on Tuesday morning, according to a league source.

While the results of the Phillies COVID-19 tests were not known Tuesday morning, the league source said that Wednesday night’s game between the two teams in the Bronx was still scheduled at this point. The Yankees, who decided to stay in Philadelphia after Monday night’s game in hopes of getting Tuesday night’s game in, will return to the Stadium and workout.

The Phillies were tested Monday after an outbreak on the Marlins put them in close contact with the virus. The Marlins had over a dozen members of their traveling party test positive during the weekend road trip to Philadelphia.

The extra day off is at least partially what infectious disease experts were asking for.

While the players are tested every two days on a rolling basis, there is concern among infectious disease experts that the tests would not pick up the coronavirus until it has had a couple days before it has established itself in the host body. Dr. Zach Binney, epidemiologist from Emory University said on MLB Network Radio that in his opinion, the Phillies should shutdown their team for at least 5 days to ensure they weren’t exposed by a Marlins player.

“This could put it in danger,” Dr. Anthony Fauci said on Good Morning America. “I don’t believe they need to stop, but we just need to follow this and see what happens with other teams on a day-to-day basis.”

Even with the threat this outbreak could explode, the league was not considering shutting down the season or even pausing the Marlins season. All 30 owners had a previously scheduled conference call Wednesday afternoon and the idea of shutting down was not seriously discussed, MLB commissioner Rob Manfred said in an interview on MLB Network Monday night.

“I think most of the owners realize that we built protocols, anticipating that we would have positive tests at some point during the season, that the protocols were built in order to allow us to continue to play through those positives,” Manfred said. “And I think there was support for the notion that we believe that the protocols are adequate to keep our players safe.”

The league’s plan was to emphasize the health and safety protocols, which include discouraging going out and socializing. They will reiterate the rules of wearing a mask in the clubhouse and prohibit contact like fist bumps and high fives on the field.

When the league and union negotiated to restart the season after a nearly four month shutdown because of the COVID-19 pandemic, they worked out a 113-page health and safety protocol. They did not agree on a threshold to trigger a possible pause or shut down of the season. The language vaguely talked about the infections becoming wide-spread enough to affect the competitive integrity of the season. So far, the league feels that they can contain and manage the Marlins outbreak. This is yet another blunt reminder to the Yankees about the fragility of playing a season in the middle of an uncontrolled pandemic. The virus, which has infected over 4 million Americans and killed over 145,000, shut down the sport in March for four months. After limited exposure during a three-week rebooted spring training in their home ballparks, this was the first weekend of teams breaking out of those bubbles and traveling.

The Yankees have already had to face this issue.

Hours before they were to play the first game of the MLB season in Washington Thursday night, the Nationals’ star Juan Soto was scratched hours before they met in the season opener after he tested positive. The Bombers, however, said they never considered not playing that game.