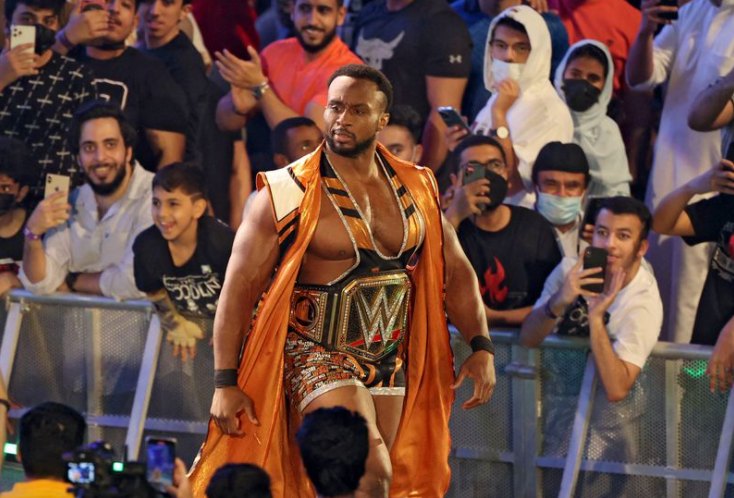 Big E, whose real name is Ettore Ewen, was supposed to get flipped onto his back by his opponent Ridge Holland. But instead, Holland dropped Big E on his head.

An UGLY landing for Big E at ringside. Looks like he landed on his head and he was not seen again on-screen after this. #SmackDown #WWE
pic.twitter.com/VizfehW7ug

SmackDown went to commercial break, but fans captured Big E being taken out of the arena in Birmingham, Ala., on a stretcher. The 36-year-old was seen giving a thumbs-up.

Later on Friday night, Big E posted a video to Twitter letting people know his neck was broken but he was doing OK.

“I can move all of my digits, you see that, that’s nice,” he said, showing his hand for proof. “That’s always a good thing. Strength feels fine, but unfortunately right now they tell me my neck is broken. I’ll be all right, I’ll be good, don’t worry.”

Big E provided a more specific medical update on Saturday: His C1 and C6 vertebrae were fractured but not displaced, and he suffered no spinal cord injuries and would not need surgery.

“And a pro tip: If you’re going to break your neck, do it in Birmingham,” he said. “They’ve been great, everyone here at UAB (Hospital) has been great.”

In both videos, Big E thanked people for all the support and well wishes they sent him following the injury.

“I can’t thank all of you beautiful people enough for all of your concern and your messages, it’s very heartwarming,” he said.

Big E was a backup defensive lineman at the University of Iowa and a powerlifter before he signed with WWE in 2009.