Two people stabbed at the MOMA, suspect at large 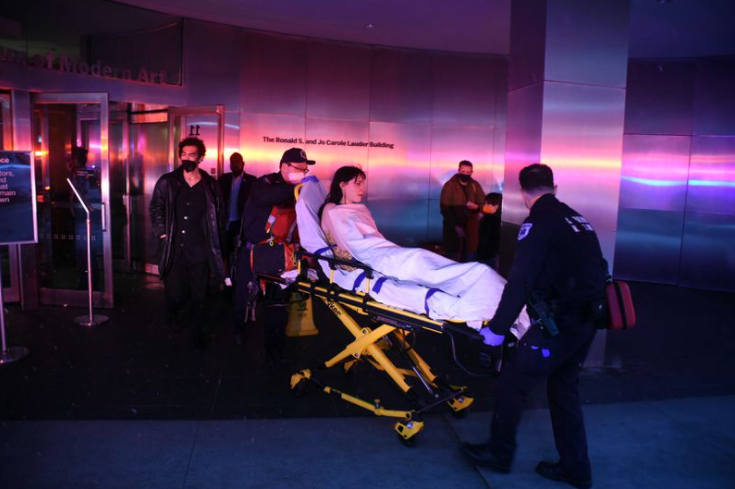 The workers, two women who were behind the counter at the museum’s movie theater entrance, were stabbed in the back and the collarbone behind the neck and taken to Bellevue hospital where they are expected to fully recover, NYPD spokesman John Miller said.

The attacker, a white man in his 60s, had his membership revoked on Friday because of two previous disruptions at the museum, police said.

He began his rampage when he discovered Saturday he would not be admitted to see a movie. “He became upset about not being allowed entrance and then jumped over the reception desk and proceeded to attack and stab two employees of the museum multiple times,” said Miller.

“He was screaming like he was crazy,” said eyewitness Alessandro Puglieso, 25, who was online to buy tickets to “Bringing Up Baby” near the entrance of the theater inside the W. 53rd St. museum.

“I couldn’t really make it out. I was sort of frozen at first,” Puglieso said of the man’s ranting.

The stabber fled the museum and tried to get into a nearby Episcopal church and has still not been apprehended, police said.

“I’m still processing it,” Puglieso said. “It’s not what I was expecting going to see a movie on a Saturday.”

The suspect had not been apprehended by Saturday evening, but Miller said police know who he is because of a disruption he is believed to have caused on Friday. “We are endeavoring to locate this person right now,” Miller said.

The attack on Saturday happened so suddenly that security barely had time to react. “This was a rapidly unfolding spontaneous incident,” Miller said.

Eyewitnesses reported on Twitter that the museum was evacuated.

“I was watching Picasso and Cezanne, you know, enjoying the museum and they said the museum is closed,” said David Dureyko, who was visiting from Chicago.

“Suddenly people started running,” Dureyko said. “There was a little panic on the escalators and then they started shouting, ‘Get out, get out for your own safety.’

“I’m happy we got out. I heard that there was a stabbing. That was a bit scary.”

John Sanchez, 33, of Connecticut, had just entered the main museum when pandemonium broke out.

“We were going up the escalator to our first exhibit and there was just a crowd of people running towards us,” he said. “Once you see people running you think let me head the other way. It was hectic.”

“You just always expect the worst with people running like that.”