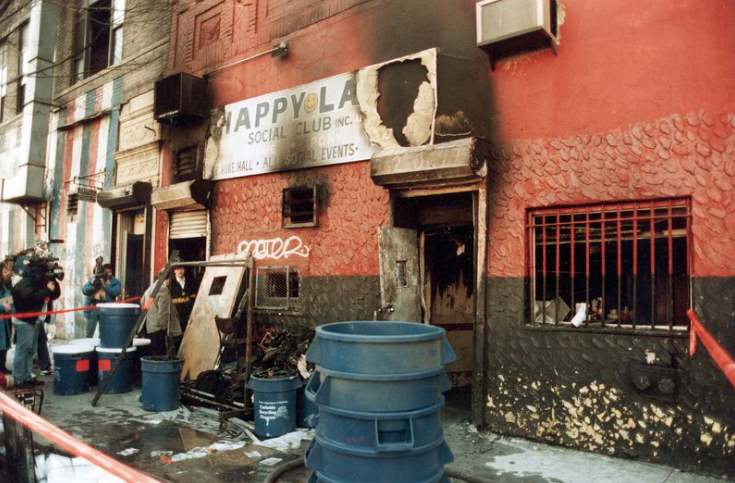 Of all the places Isabel Gamoneda could live with her family in the Bronx, the apartment she calls home is right across the street from a crowded high rise where 17 of her neighbors, including eight children, perished last week in a horrific fire.

As she watched the chaos, smelled the smoke and heard the awful screams, she was instantly reliving the hellish inferno more than 30 years ago that killed her two brothers.

Gamoneda has never been able to escape the pain of the Happy Land Social Club fire in 1990 that wiped out 87 people after a raging, rejected boyfriend torched the entrance and trapped partygoers inside.

But to have the searing reminder in her window, blazing before her eyes, was much more than she could bear.

“It’s like we’re still living what happened back then,” Gamoneda said. “It’s something that we’ve lived through already, but there are no words for this. Because when this fire started, all I did was go to hug my mom. My mom is 92-years-old. And I said to her, ‘Maybe my brothers screamed for help like that, and no one helped them.’”

Most of the victims who died last week when a space heater set off the blaze in a tower along E. 181st St. near Tiebout Ave. weren’t even born when the social club fire changed Gamoneda’s life forever.

She can’t get out of her head the echoes of the screams she heard across the street, and is haunted by the knowledge that the youngest victim was just 2 years old. Her own kids had played with some of the children whose homes were filled with toxic smoke.

Gamoneda said she and her sons witnessed the anguish, the despair, the cries for help, and survivors who made it out alive.

“We saw when a woman brought a girl out in her arms, a firefighter took her from the woman and was giving her CPR,” Gamoneda said. “But the girl was already dead.”

“We have in our head the screams of the people who were begging for help with their kids,” Gamoneda explained “My kids had so many friends over there. The family where everyone died, those were my son’s friends. So he’s going around collecting clothes to try to help other victims.”

Gamoneda, 56, the youngest of 12, sometimes went to clubs with her brothers, Lennyn, 17, and 23-year-old Marco, known as Tulio, but not that night in 1990, when they were killed with their friends.

Nearly all the Happy Land victims — 61 men and 26 women — died of smoke inhalation, but authorities said several were trampled in the stampede for the door.

Seven victims were from the same family.

A dejected boyfriend, Julio Gonzalez, was convicted of starting the Happy Land fire. Authorities said he torched the illegal nightclub on March 25, 1990 after an argument with his former girlfriend, Lydia Feliciano, who was one of only six people to escape the blaze.

After being thrown out by a bouncer that night, Gonzalez returned with $1 worth of gasoline, poured the fuel around the door and lit it with two matches. Then he watched the place go up in flames before going home.

At the time, it was called the largest mass murder in U.S. history.

Gonzalez was locked up on a 25-year to life sentence in Clinton Correctional Facility after he was convicted of murder.

In 2015, Gonzalez, 61, died after suffering an apparent heart attack in prison. Relatives of some of the victims who perished in the fire said at the time that Gonzalez could burn in hell.

Gamoneda and her mother, Leticia, still look at photos of the brothers and sons they lost. Gamoneda’s own son, Michael Nunez, bears a strong resemblance to his uncle Lennyn.

A gleaming brown granite memorial stands across the street from the site of the club, with the names of all 87 victims etched in its side. Gamoneda goes there often to honor her brothers and their friends.

“It’s something that happened 32 years ago, but for us it’s like no time has passed.” Gamoneda said. “We still remember it. I go there to the memorial. I put candles and flowers.”

She said she doesn’t know what to say to the survivors, the people like her and her mother who lost so much.

“We’re looking now to move. It’s horrible,” she said. “You don’t have words to tell those families. It’s something impactful to live this again, this horrible thing that happened.”