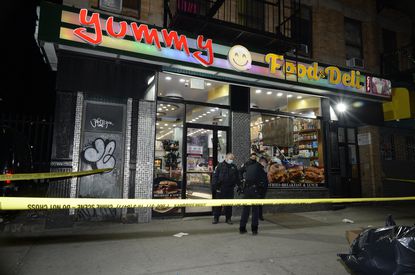 A side-eye gaze sparked a caught-on-camera shooting in a Harlem deli that left one man wounded, police said.

The 20-year-old gunman, who is still being sought, is now facing attempted murder charges for the shooting inside Yummy Deli on Frederick Douglass Blvd. and W. 131st St. on Tuesday, cops said.

The 22-year-old victim and suspect were eating inside the deli around 9:30 p.m. when the suspect became enraged that the victim was staring at him too long.

“What are you looking at?” the suspect screamed at the victim, police said.

Surveillance video released Friday shows the victim throwing a tin of food at the gunman and running away as the gunman pulls the trigger. A panicked customer standing near the counter runs past the gunman and out the door, the video shows.

“Don’t run!” the gunman, dressed in all black, yelled as he whipped out his silver pistol, cops said.

The gunman had entered the deli just a few moments before the shooting, cops said. An accomplice, riding a push scooter, waited outside on the sidewalk.

The victim was hit in the buttocks and right arm and was taken to Harlem Hospital. The customer who run past the gunman was not hit.

The deli shooting was the second of two assaults in Harlem on Tuesday, officials said.

About four blocks away, a 17-year-old boy was slashed in the neck during a 4:30 p.m. clash outside the St. Nicholas Houses on W. 127th St. near Frederick Douglass Blvd., cops said.

Medics took the teen to Harlem Hospital with minor wounds. Cops were still looking for the slasher.