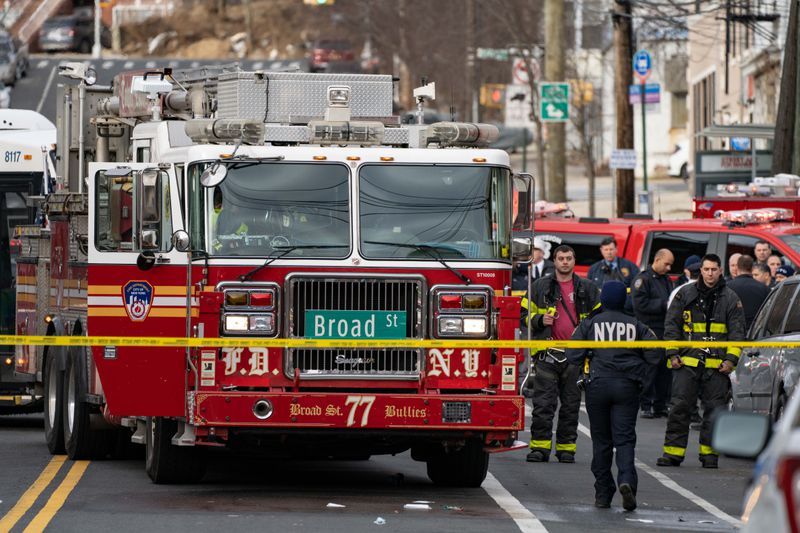 A 7-year-old Staten Island boy ended up in the hospital Saturday after darting in front of an FDNY truck headed back from a 911 call, with firefighters immediately rushing to the bleeding child’s aid, authorities said.

The driver of the rig stood weeping in the street after the 7:30 a.m. accident near the corner of Broad St. and Gordon St., with eyewitnesses describing a grim scene where the youngster ran around a bus and into the path of the oncoming truck.

Police said the boy’s injuries were not life-threatening and he was expected to pull through.

“The boy was standing there and just jumped out into the street without looking left or right,” said a local store owner who saw the crash on security video. “I can’t even describe it. It was bad. I think it had nothing to do with the fireman. He stopped and tried to move out of the way.

“The kid is the victim, the fireman is a victim.”

Felix Rodriguez, who works at a nearby deli, said the boy was by himself when he ran around a bus before stepping directly into oncoming firetruck’s path.

“It wasn’t a hard impact but the fire truck hit him and knocked him back,” said Rodriguez, 60. “(The child) was crying on the ground in shock, couldn’t talk.”

The firefighters from Ladder Co. 77 immediately stopped and treated the boy before EMS arrived and rushed the child to Richmond University Medical Center. The first responders were heading east on Broad St., about five blocks from their house, when the accident took place.

The devastated driver, unable to stop sobbing, was taken from the scene in an ambulance.

“He was crying, crying like for an hour,” recounted Rodriguez, tears welling in his eyes. “He must have had kids or something. I felt that … it could have been my son.”

Rodriguez said the boy was in the deli the day before and he and his mother had just moved to the neighborhood. Authorities tracked down the victim’s family to deliver the bad news, and brought the mom to the hospital as well.

Another eyewitness said the driver never had a chance to avoid the little boy.

“The kid crossed in front of the bus and the kid was so small,” said the man. “No one expects this to happen … I’m just praying for him.”