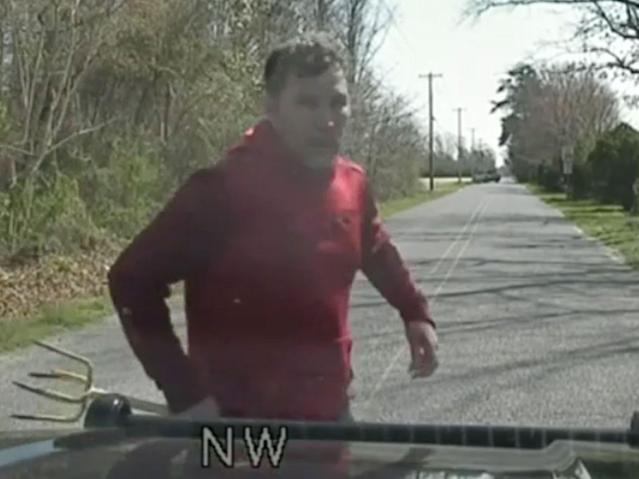 The dash camera footage shows Roy Jackel, 41, get inside a cop cruiser on April 5 in Buena Vista, N.J. and drive about a mile down Cumberland Ave., where he stopped and got out, police said.

Several officers stop on Cumberland Ave. and take position behind a police SUV, footage shows. In the distance, Jackel approaches.

“Let me see your hands,” one officer yells several times. “Show me your hands.”

Jackel then starts running. While he’s obscured by the police SUV, a single gunshot is heard on the video. Then Jackel emerges from behind the vehicle and tumbles to the asphalt.

The father of two was pronounced dead at the scene at 4:11 p.m., the attorney general’s office said. Officials identified the officer who fired the fatal shot as Sgt. David Jernegen.

The incident began with Buena Vista and Franklin Township cops responding to a call for a car crash on the rural road.

Jackel was involved in the accident, and took off into the woods on foot while Franklin Township Police were at the scene, authorities said. Cops entered the woods to find him, and that’s when Jackel returned and stole an unoccupied police SUV, authorities said.

Police had already received a 911 call from a woman who identified herself as Jackel’s wife, according to NJ.com.

The wife said he was visiting his parents at the time he was shot, NJ.com reported.

The shooting, as well as the traffic accident that led to Jackel’s death, remain under investigation, authorities said.