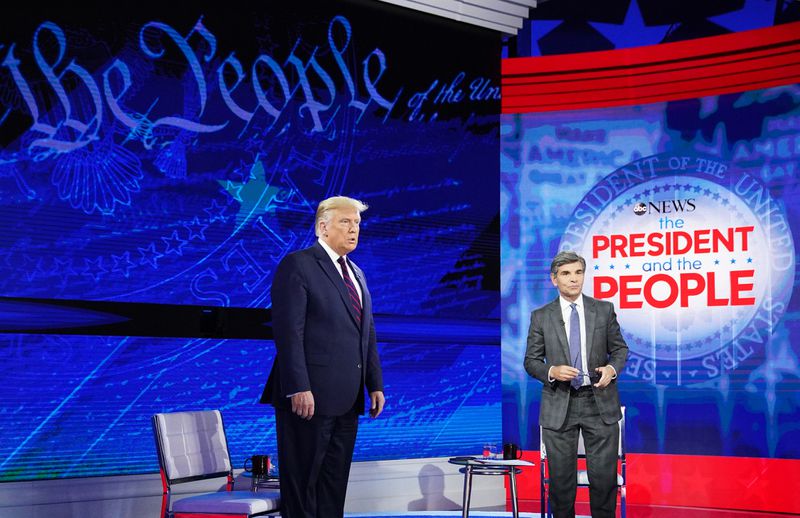 The ratings are in for President Trump’s town-hall meeting and they’re downright covfefe.

The ratings-obsessed commander-in-chief’s performance on ABC was a downright dud, drawing less than 4 million viewers on Tuesday, reported The Hollywood Reporter.

Trump couldn’t even outshine his Fox News confederates Tucker Carlson or Sean Hannity, who each generated a double-digit percentage viewership edge over him on Tuesday.

“The President and the People: A 20/20 Special Event,” staged in Philadelphia and moderated by George Stephanopoulos, had the president answering questions from undecided voters. The 90-minute show attracted 3.97 million spectators, according to the Reporter.

Those numbers were dwarfed by “America’s Got Talent,” which easily claimed the night with 5.94 million watchers. A Game 7 NBA conference semifinal featuring the Denver Nuggets and Los Angeles Clippers was the second-most-watched playoff game so far this season with 5.23 million viewers and an impressive 2.2 million spectators in the coveted 18-49 demographic.

Trump also lagged behind an episode of “Big Brother” and Game 1 of the Miami Heat’s thrilling overtime conference final win over the Boston Celtics.

Due to the COVID-19 outbreak, pro hoops and hockey games have been major players vying for their share of the TV viewership pie. Ordinarily, both leagues complete their postseason in mid-June and don’t play meaningful games again until October.

Sunday afternoon’s national NFL game between the Tampa Bay Buccaneers and New Orleans Saints — in which Tom Brady made his Bucs’ debut after a 20-season stint in New England — has blown away all other contenders for the week in drawing a jaw-dropping 28.5 million spectators, according to Fox Sports.