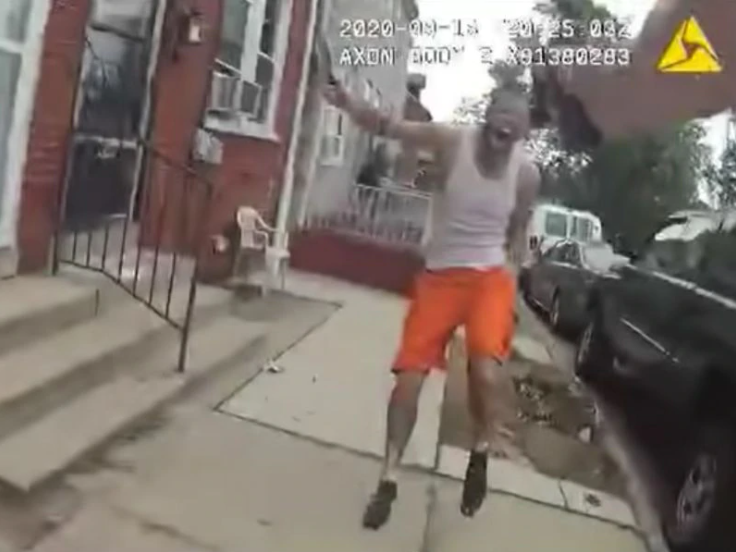 Police in Pennsylvania deployed tear gas on a crowd of protesters following the fatal shooting of a suspect who chased an officer with a knife during a domestic violence investigation Sunday afternoon.

Body-cam footage released by Lancaster authorities just hours after the incident shows the 27-year-old man coming out of a home and running toward the officer with a knife in his right hand. The officer fired several shots as he ran from the suspect on the sidewalk, the video shows.

The man, identified as Ricardo Munoz, was pronounced dead at the scene.

The officer has been placed on leave and the Lancaster County District Attorney’s Office is investigating the incident.

The shooting prompted immediate protests against the city’s police department, with demonstrators echoing many of the calls heard in cities across the country this summer. A crowd of more than 100 people gathered outside the Lancaster police station late Sunday night, calling for justice and chanting “No justice, no peace.”

Many of them, however, resorted to violence and vandalism.

Cops later deployed “chemical munition” at a crowd of demonstrators who had blocked an access ramp to the police station and refused to leave after multiple warnings.

The afternoon shooting happened after a woman called 911 reporting that her brother was “becoming aggressive” with his mother and was trying to break into her house, police said in a news release.

The first officer on the scene walked to the front of the house and began speaking with a family member right before Munoz stormed out of the home with a knife, according to the release and the officer’s body-cam footage.

Lancaster Mayor Danene Sorace urged the public to be patient as during the investigation.

“This has been a heartbreaking day for our city,” she said in a statement. “I grieve for the loss of life and know that there are more questions to be answered as the investigation continues.”

“A police-involved shooting has significant impact on a community, as we are seeing with the large number of individuals gathering in the streets,” Adams wrote. “However, I am asking that all reaction be tempered as the investigation is ongoing.

“We will do our best to release details about the incident in a timely manner,” she added. We ask that acts of protest remain peaceful as violence and destruction of property will become headlines and serve no purpose for the safety and wellbeing of our citizens and neighborhoods.”