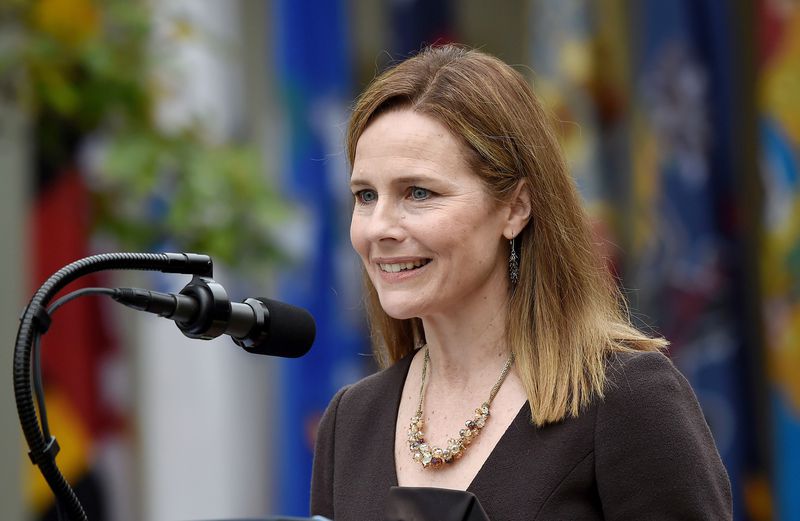 President Trump’s nomination of conservative federal judge Amy Coney Barrett to the Supreme Court, like much of his White House tenure, was both applauded and attacked across a nation divided.

While Democrats and liberal groups were quick to rip Trump and demand a vote delayed until after the Nov. 3 presidential election, Republicans and conservative organizations just as quickly hailed the choice of the 48-year-old mother of seven from Indiana to replace the late Justice Ruth Bader Ginsburg.

“I will strongly oppose the nomination,” promised Sen. Chuck Schumer (D-NY), who was joined in the vow by fellow New York Democrat Sen. Kirsten Gillibrand. “President Trump and (Senate) leader Mitch McConnell are doing what no Senate has done before: shamelessly rushing to fill Justice Ginsburg’s seat less than 40 days before a presidential election.”

Democratic Presidential nominee Joe Biden, calling out Barrett for her opposition to the Affordable Care Act, echoed Schumer’s call for a moratorium on choosing a new justice until next year.

“The United States Constitution was designed to give the voters one chance to have their voice heard on who serves on the Court,” said Biden. “That moment is now and their voice should be heard.”

House Speaker Nancy Pelosi said the Barrett pick was motivated by Trump’s desire to “crush the Affordable Care Act in the Congress and the courts …. as he dismantles the pillars of health and economic security in this country.”

“Every vote to conform this nominee is a vote to dismantle health care,” she concluded.

Barrett, accompanied by her husband and their seven children, received a standing ovation from the Rose Garden crowd as Trump introduced her as the nominee, with the president predicting a “straightforward and prompt” confirmation.

Sen. Mitch McConnell, who called for Trump to replace Ginsburg barely an hour after the legendary jurist’s death was announced, praised Barrett as the perfect choice.

“President Trump could not have made a better decision,” said McConnell. “As our nation continues to mourn Justice Ginsburg and honor her trail-blazing legacy, it does seem fitting that another brilliant and talented woman at the top of their shared profession would follow in her footsteps onto the court.”

Pro-gun and pro-life groups were quick to support Barnett, with the issue of Roe V. Wade likely to be revisited by a court with six conservatives if her nomination is approved.

“Every day in our nation, 2,363 children with a beautiful future ahead are poisoned, dismembered, and suctioned to death by abortion,” said Lila Rose, president and founder of the pro-life group Live Action. “This is the greatest injustice of our day. It is time to fix what we’ve gotten wrong.”

The conservative Federalist Society’s Leonard Leo, who has advised Trump on judicial appointments, heaped praised on the choice.

“In nominating Amy Barrett to the Supreme Court, President Trump has again fulfilled his promise to appoint Justices who are not only exceptionally qualified, but willing to bravely stand up for the Constitution as it’s written and not bend to political pressures or personal preferences,” he said.

“Amy Coney Barrett is a highly-respected jurist with distinguished legal and academic credentials,” said Romney. “I believe our next justice must faithfully apply the law and our constitution, impartially and regardless of policy preferences.

“I look forward to meeting with Judge Barrett, reviewing her record thoroughly, and carefully evaluating her qualifications.”

Gillibrand echoed her colleague Schumer in ripping the White House for fast-tracking the nomination of the conservative Catholic candidate.

“President Trump’s nomination of Judge Amy Coney Barrett to the Supreme Court represents the further degradation of our democracy and the continued politicization of our judiciary,” she said.

“Even if this process had been legitimate, Barrett’s anti-choice views, opposition to the Affordable Care Act, and hostility to immigrant rights and civil rights make her completely unfit to serve on the Supreme Court.”

“We move forward on this nomination knowing that the President has picked a highly qualified individual who will serve our nation well on the highest court in the land,” Graham said.