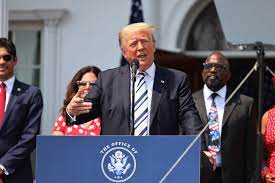 Donald Trump’s latest gambit is a class-action lawsuit against Twitter, Facebook and Google for kicking off him and others. It amounts to a primal scream with no basis in the Constitution, statute or precedent.

“While the social media companies are officially private entities, in recent years they have ceased to be private with the enactment and their historical use of Section 230, which profoundly protects them from liability,” he said upon unleashing the complaint.

It’s novel to claim that liability protection granted a corporation — in this case, Congress wisely deciding that websites and apps with millions of users aren’t on the hook for every single thing they let people post, while still encouraging standards to prevent harassment, hate speech and more — magically transforms it from a private entity into a public one. By the same logic, would gun manufacturers, shielded from suits by a rotten federal law Trump loves, also become agents of the government?

Indeed, to the extent that Twitter and Facebook have “taken control of the public square,” as Trump’s lawyer claims, it’s in no small part because they have guidelines that keep them loose and lively and mostly open without becoming complete and total cesspools.

Yes, the companies have amended those rules over time, and they’ve often been sloppy in meting out discipline. That’s partially their fault and partially the result of a complex, ever-changing landscape. Still, getting deplatformed is no more an abridgment of Trump’s or other putative plaintiffs’ rights than it would be if a bookstore dropped all tomes by liberals or conservatives or Communists from its shelves.

We, like Trump, prefer brevity. So we distilled the suit to a single, 280-character Trumpian tweet: BIG TECH BOOTED ME BECAUSE I INCITED VIOLENCE. PRIVATE BUSINESSES IN A FREE SOCIETY HAVE A TOTAL RIGHT TO DO THIS. BUT I GET PUBLICITY BIGLY AND GIN UP MY MINIONS BY FILING SUIT. PLUS WE’LL DOUBLE THE RAGE WHEN A JUDGE — HOPEFULLY, A MEXICAN JUDGE — THROWS IT OUT OF COURT. MAGA!!