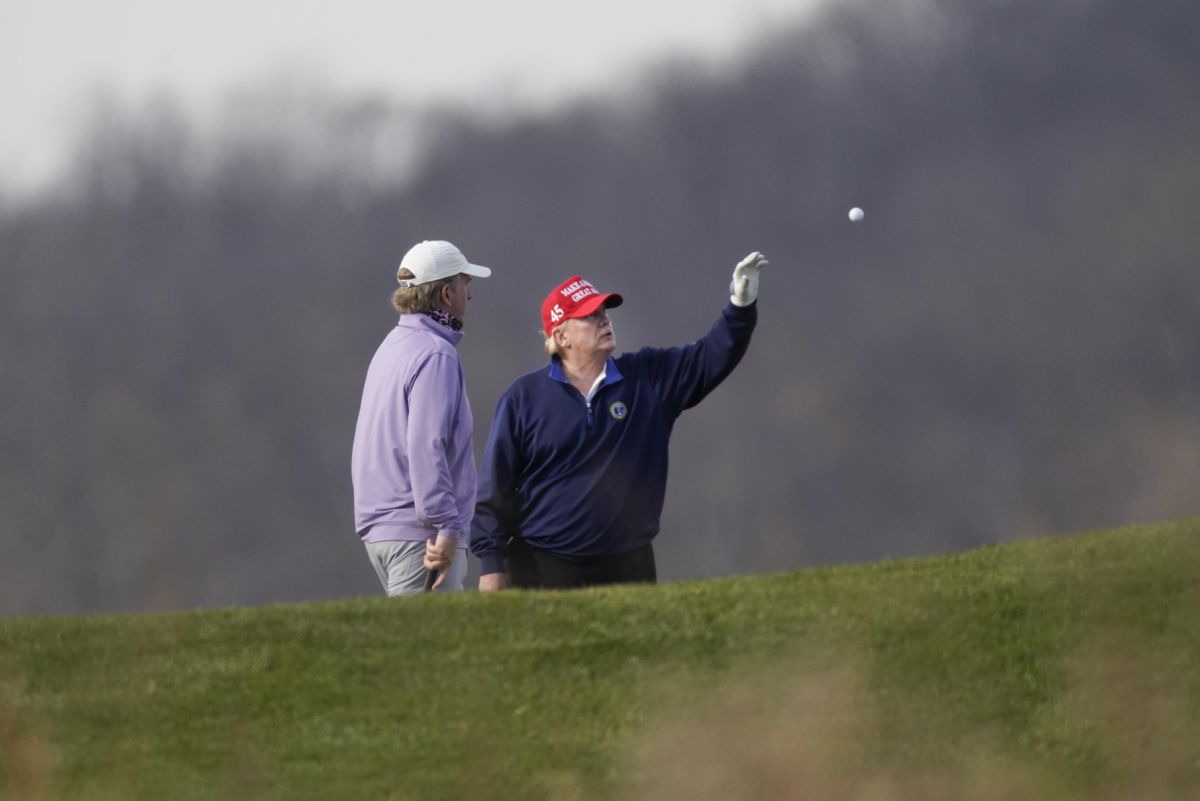 President Trump hit the links at his private golf course in Florida on Thursday despite pledging to “work tirelessly” through the holiday season amid a looming economic crisis of his own making.

In the Sunshine State for Christmas, Trump arrived at his namesake golf club in West Palm Beach shortly before 10:30 a.m. for a holiday round on the greens, according to a pool report.

A White House spokesman declined to say if any other golfers were expected to join Trump on the course.

The Christmas Eve outing — Trump’s 294th round of golf since taking office, according to a tracker service — followed an unusual entry on the president’s public agenda.

“As the Holiday season approaches, President Trump will continue to work tirelessly for the American people,” read the entry on Trump’s otherwise empty day. “His schedule includes many meetings and calls.”

While Trump tried to stay out of sand traps in Florida, millions of Americans forced into unemployment because of the coronavirus pandemic were on the brink of losing their final financial lifeline.

A couple of critical federal unemployment programs are set to expire on Saturday. If the programs lapse — which appears a near certainty with Congress in recess until Monday and Trump in Florida — more than 12 million Americans will be thrown off their jobless aid without any other relief in the pipeline.

Meantime, the government is set to run out of funding on Monday. If new funding isn’t allocated, the government will shut down, likely resulting in furloughs of thousands of federal employees, including at public health agencies fighting the pandemic.

The turmoil on the horizon could’ve been averted if Trump signed a package of coronavirus stimulus and government spending bills worth nearly $2.4 trillion and passed on a bipartisan basis by both chambers of Congress earlier this week.

But before leaving for Florida on Wednesday, Trump blindsided members of his own party by announcing he wouldn’t sign the bills because he wanted U.S. taxpayers to receive $2,000 stimulus checks instead of the $600 payments earmarked in the legislation.

That demand put Trump’s Republican allies on Capitol Hill in a bind, as they’ve long opposed such sizable stimulus checks.

Democrats, though, are major proponents of cutting $2,000 checks.

On Thursday morning, Democrats in the House called Trump’s bluff and forced a vote on an amendment to increase the payouts. House Minority Leader Kevin McCarthy (R-Calif.), usually a die-hard Trump loyalist, blocked the vote, leaving Americans in stimulus limbo over the holiday weekend.

Congress will reconvene Monday, though it remains unclear if a deal can be reached in light of Trump’s 11th hour shakeup.