Trump: Economy ‘roaring back’ after jobs report despite coronavirus ‘flames’ across U.S. 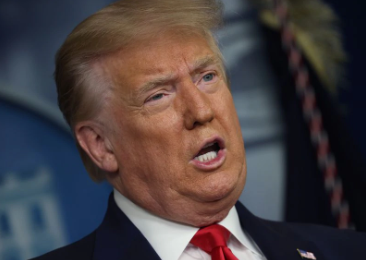 Coronavirus resurgences are rocking nearly all parts of the country, millions of people remain unemployed and the pandemic has already taken more than 128,000 American lives — but President Trump didn’t want to talk about all that on Thursday.

Instead, the president took an upbeat victory lap over some incremental new jobs numbers that he said proved the U.S. economy “is roaring back.”

“It’s all coming back. It’s coming back faster, bigger and better than we ever thought possible. These are the numbers. These are not numbers made up by me. These are numbers,” Trump said during a briefing at the White House.

Newly released Labor Department figures showed that the U.S. added a substantial 4.8 million jobs in June, while the unemployment rate dropped to 11.1%.

However, the nation has only recovered about one-third of the more than 22 million jobs lost since the pandemic ground the U.S. economy to a halt this spring. The unemployment rate, while dropping, remains at levels nearly as high as during the Great Depression.

Meanwhile, states that rushed to reopen their economies — in many cases, at Trump’s urging — are being forced to shut business sectors back down because of coronavirus spikes, likely putting more people out of work.

As of this week, coronavirus infection rates and hospitalizations are back on the rise in a staggering 36 states, with Florida, Texas and Arizona suffering their worst outbreaks.

Trump’s optimistic musings on the economy came one day after the U.S. recorded its worst 24-hour coronavirus spike yet, with 50,203 new cases confirmed Wednesday.

Still, Trump insisted the “crisis is being handled” and urged states to keep reopening, promising that the federal government will help put out any coronavirus “flames” that might erupt.

“It’s opening up far faster than anybody thought even possible, and more successfully,” said Trump, whose bid for reelection was pitched on the strong state of the economy before the virus hit.

Before leaving the White House briefing room without taking any questions, Trump added: “These are historic times when a lot of people would have wilted. But we didn’t wilt.”