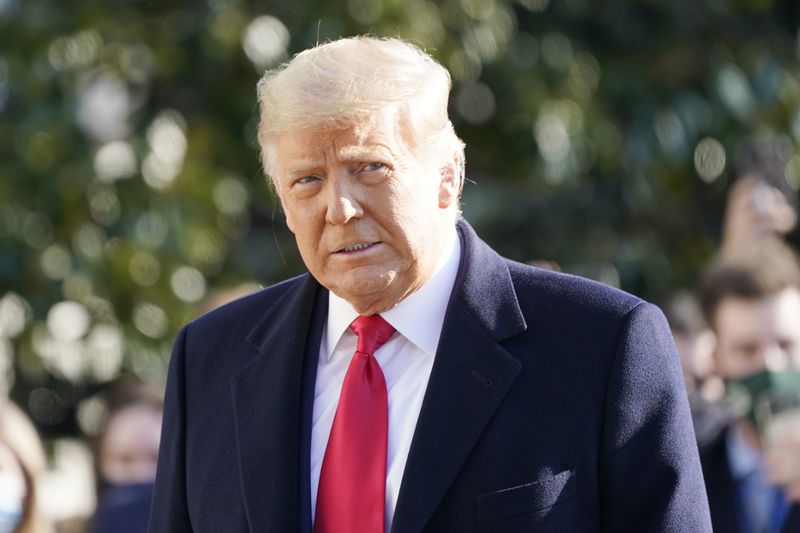 President Trump insisted Tuesday that he’s not worried about being forcibly removed from office, even as impeachment-hungry members of both parties pressed full steam ahead on a double-barreled effort to oust him for instigating the deadly attack on the U.S. Capitol that has hurled the nation into a constitutional crisis.

With just eight days left as president, Trump jetted to Texas to burnish his tarnished legacy by touring a section of border wall constructed under his administration.

But the chaos he caused on Capitol Hill overshadowed the Texas trip, as the House passed a resolution late Tuesday, in a 223 to 205 vote, calling on Vice President Mike Pence to invoke Section 4 of the 25th Amendment to remove his embattled boss on the grounds that he’s a danger to national security. Illinois Rep. Adam Kinzinger was the only Republican to vote for the resolution.

Pence, however, shot down the 25th Amendment prospect before the House even got to vote.

“You and the Democratic Caucus are demanding that the Cabinet and I invoke the 25th Amendment. I do not believe that such a course of action is in the best interest of our nation,” Pence wrote in a letter to House Speaker Nancy Pelosi (D-Calif.) a few hours before the planned vote.

Earlier in the day, Trump had scoffed at the idea that his loyal vice president would pull the trigger on the 25th Amendment process, which can only be successful if a majority of the cabinet agree he’s incapable of discharging his duties.

“The 25th Amendment is of zero risk to me but will come back to haunt Joe Biden and the Biden administration. As the expression goes, be careful what you wish for,” Trump said in Alamo, Texas, expressing no contrition for fomenting the assault on the Capitol that left five people dead, including a police officer.

The 25th Amendment aside, Democrats have another plan Trump can’t stop.

Under the stewardship of Pelosi, the House is set to debate and vote on an article of impeachment Wednesday that charges Trump with inciting last week’s bloody attack on the Capitol.

The impeachment article is virtually certain to pass, with unanimous support among the House’s Democratic majority and even some backing from prominent Republicans.

Wyoming Rep. Liz Cheney, the No. 3 Republican in the House, delivered a blistering rebuke to Trump as she announced late Tuesday that she would vote to impeach him, becoming the first member of GOP leadership to openly commit to the idea.

“The president could have immediately and forcefully intervened to stop the violence. He did not,” Cheney said. “There has never been a greater betrayal by a president of the United States of his office and his oath to the Constitution. I will vote to impeach the president.”

New York Rep. John Katko, the top Republican on the House Homeland Security Committee, announced after Cheney that he would also vote to impeach, as did Kinzinger and Fred Upton (R-Mich.). As many as 20 House Republicans may end up voting to impeach Trump, according to reports.

Citing false and repeatedly debunked voter fraud claims, Trump urged thousands of his supporters at a rally outside the White House last Wednesday to “fight like hell” to stop the congressional certification of Biden’s election as president before they stormed the Capitol in his name, many of them armed. As the assault was underway, Trump’s immediate instinct wasn’t to condemn the attackers. Instead, he posted a Twitter video professing his “love” for them.

But speaking at the White House before leaving for Texas, Trump claimed it’s somehow Democrats who are stoking violence and insisted his riot-triggering speech was “totally appropriate.”

Trump is set to become the first president in American history to be impeached twice, having already faced the grave congressional rebuke in 2019 for pressuring Ukraine’s government to produce incriminating information about Biden while using U.S. military aid as leverage.

Despite the 25th Amendment effort’s certain failure, Democrats argued that Congress needed to jump through all the hoops in order to get Trump’s top officials on the record.

“If neither the president, nor his cabinet, nor his vice president is willing to act, then we’re going to do what we can do, which is impeachment,” Rep. Sean Maloney (D-N.Y.), who was on the House floor when the pro-Trump mob stormed the Capitol, told the Daily News before Tuesday’s 25th Amendment vote.

“They all get at the same result,” the Hudson Valley representative continued, “but I think people should understand that the only reason he’s still in office is because he still has people protecting him. And that is a very dangerous position to be in, when he has already incited an attack on the Capitol once.”

If approved by the House, the impeachment article will head to the Senate for trial.

The Senate is, however, facing a tightening window of time to conduct a trial, with Biden set to be inaugurated next Wednesday, Jan. 20.

Moreover, Senate Majority Leader Mitch McConnell (R-Ky.) has said a trial can’t start until Jan. 19 because of procedural rules, raising the prospect that the contentious affair could take place during Biden’s first few days in office.

But Sen. Chuck Schumer (D-N.Y.), who’s set to take over as majority leader in light of Democrats regaining control of the chamber, said McConnell can call back the Senate immediately by using an emergency authority established in 2004.

“The bottom line is that Leader McConnell has the ability to call us back into session, and we can then move to convict Donald Trump in the impeachment trial,” Schumer told reporters outside his Midtown office Tuesday afternoon.

McConnell may just take Schumer up on his demand, with The New York Times reporting that the Kentucky Republican has told associates in recent days he believes Trump committed impeachable offenses and that he’s “pleased” Democrats are rushing to remove him.