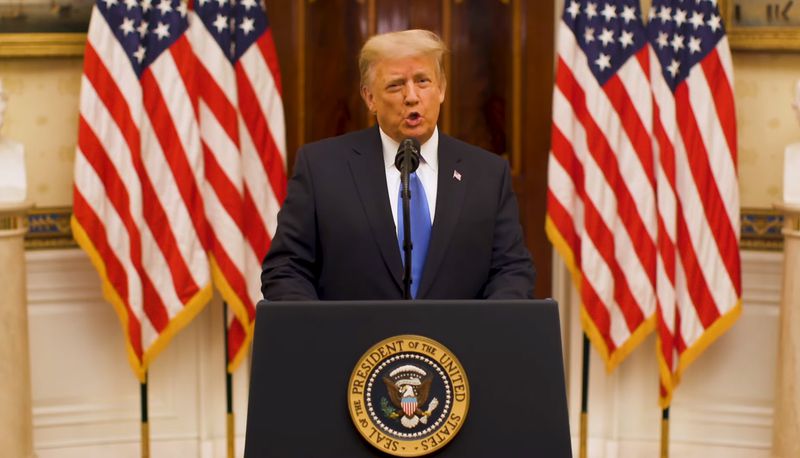 President Trump claimed in a muted farewell address Tuesday that he’ll “pray” for Joe Biden’s administration and insisted he was “horrified” by the attack on the U.S. Capitol that he incited earlier this month, as he prepares to leave office with a whirlwind of legal troubles on the horizon, including an upcoming Senate impeachment trial.

In a nearly 20-minute video released on his last full day as president, Trump said he’s proud to depart the White House having done “what we came here to do.”

“This week, we inaugurate a new administration and pray for its success in keeping America safe and prosperous. We extend our best wishes, and we also want them to have luck — a very important word,” Trump said cryptically in the video, which was shot at the White House with four American flags as a backdrop.

Over the course of the address, Trump never mentioned President-elect Biden or Vice President-elect Kamala Harris by name — an omission made especially noticeable by the fact that he spent months trying to delegitimize their election with false allegations of voter fraud.

Shifting gears, Trump offered a brief condemnation of the Jan. 6 assault on the Capitol that left the halls of Congress ransacked and five people dead, including a police officer.

“All Americans were horrified by the assault on our Capitol. Political violence is an attack on everything we cherish as Americans — it can never be tolerated,” he said. “Now more than ever we must unify around our shared values and rise above the partisan rancor and forge our common destiny.”

Trump did not mention that the thousands of rioters who staged the bloody attack stormed the Capitol after he told them at a rally to “fight like hell” to stop the congressional certification of Biden’s election taking place inside the building.

The House impeached Trump last week for instigating the riot, making him the first president in American history to be impeached twice and paving the way for his Senate trial to take place after he’s out of office — but he paid that no mind in his farewell video, opting instead to list off some of his self-described “achievements.”

He said he signed “the largest package of tax cuts and reforms in American history” into law — even though larger cuts were imposed by President Ronald Reagan — touted his administration’s perilous trade war with China as “monumental,” trumpeted his administration’s renegotiation of the NAFTA trade deal and claimed he “built the greatest economy in the history of the world” before blaming the coronavirus pandemic for the recent financial collapse.

Trump also took credit for pulling the U.S. out of the “impossible” Paris Climate Accord — which Biden has pledged to reenter within hours of his Wednesday inauguration — and claimed his administration restored “American strength at home and American leadership abroad.”

Instead, he plans to hold a “farewell” event at Joint Base Andrews airport in Maryland before leaving for Florida to begin his post-presidential career.

A web of investigations in New York and elsewhere could hang over Trump as he seeks to reboot his life, though. The Manhattan district attorney, for instance, is known to be conducting a wide-ranging investigation into tax and insurance fraud allegedly committed by Trump and his namesake company.

Trump’s exit video was released on the same day that the U.S. coronavirus death toll soared above 400,000, the worst national count in the world.

Trump, who never unambiguously encouraged face mask usage and repeatedly downplayed the severity of the pandemic, took a victory lap in the video for the U.S. developing coronavirus vaccines at record-breaking speed.

“Another administration would have taken three, four, five, maybe even up to 10 years to develop a vaccine. We did in nine months,” Trump said, failing to mention that his administration has faced heat for not distributing shots fast enough.

Of the hundreds of thousands of Americans who have died from the virus on his watch, Trump said: “We grieve for every life lost, and we pledge in their memory to wipe out this horrible pandemic once and for all.”