Tom Seaver, the first one who made Mets fans believe, was the ace of New York 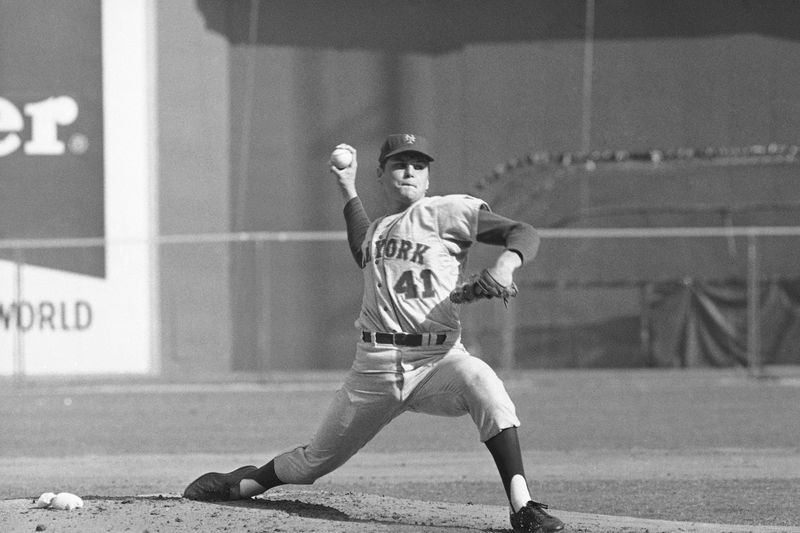 There have been other great baseball pitchers and there will be other pitchers. Just not here, and not the way Tom Seaver was a great for the Mets once. They called him “The Franchise” and that is exactly what he was, in lights, because more than anyone, he was the Mets.

He was the one, more than anyone, who brought National League baseball back to New York. The Dodgers were gone from Ebbets Field 10 years by the time Seaver came to the Mets. The Giants were gone from the Polo Grounds. I have written this before about Tom Seaver: He didn’t take away the pain of the Dodgers leaving Brooklyn and the Giants leaving the Polo Grounds. But once the ball was in his right hand and his right arm was coming forward at Shea Stadium and his knee was covered in dirt, it hurt a little less.

He was the Mets the way Michael Jordan was the Bulls. He didn’t win the way Michael did. There was only the one magic October, one of the most magical times a team and a city and their fans ever had in baseball, when the Mets finally won a pennant and then a World Series just seven years after they came into existence, and Jimmy Breslin was writing a book about them that asked “Can’t Anybody Here Play this Game?” There was just one other trip for Seaver’s Mets to the Series a few years later, in 1973.Tom Seaver, the greatest Met of all time, dies at 75 »

But Mets fans know. Baseball New York knows. You do not measure Tom Seaver in the titles he won. It was not who he was and what he was in a Mets uniform. No Met will ever matter more. He was to young Mets fans in the ’60s and ’70s what Mickey Mantle had been for the Yankees when he was a kid in the 1950s. It wasn’t until his seventh year in the big leagues, with the Mets on their way to that second World Series, that Tug McGraw, Tom’s teammate, turned “Ya Gotta Believe” into the team’s rallying cry.

But it was Seaver who first made Mets fans believe, truly. Mostly that baseball miracles were possible. He wasn’t just the ace of his staff at old Shea Stadium. He was the ace of New York, on either side of town, as far back as you want to go. If you had one game you needed to win, for the old Dodgers or Giants or the Yankees or the Mets, you would have given the ball to Tom Seaver when he was young.

Tom Seaver: Gone now at the age of 75, having lived out the last years of his life never having recovered from Lyme disease and lost in the fog of dementia, leaving his memory and his memories to the rest of us.

M. Donald Grant would trade him away to the Reds, out of meanness and spite in 1977. Seaver would pitch for the Reds after that and he would win his 300th game for the White Sox, in Yankee Stadium on a Sunday afternoon. He pitched for the Red Sox in 1986, and was on the wrong side of Shea one more Amazin’ night at that place, when the Mets came back to win Game 6, a couple of nights before they would win their first Series since ’69.

But he was never Cincinnati or Chicago or Boston. He was Shea. He was New York. He was the Mets. It was a thrill to watch him pitch, especially when he was young, when he set out on what should have been a unanimous first-ballot selection to the Hall of Fame. But the only thing better than watching Seaver was knowing him. He was smart and funny and no matter where he did go after he left the Mets, he was always going to be the Miracle Mets of ’69. No city ever had a better baseball time than that.Mets, baseball react to Tom Seaver’s death »

This is what he said the day he finally retired from baseball for good, after one last try at a comeback with the Mets in 1987:

‘‘There are a lot of emotions in this decision; a lot of sadness. But I had a beautiful 20-year career. It was a lot of work, but it brought joy to a lot of people.’’

He brought a lot of joy to a lot of people. The day they closed down Shea for good, it was him and Mike Piazza, pitcher and catcher, who walked through the outfield and through the centerfield fence and closed the door. When the All-Star Game came to Citi Field in 2013, of course it was George Thomas Seaver who threw out the first pitch. I told him that night that the pitch he threw sure looked like a strike to me. Seaver laughed that high-pitched laugh of his and sounded young again and told me that my eyes were officially as bad as his arm.

He won 311 games and lost 205 and won three Cy Young Awards. He was inducted into the Hall of Fame in 1992. There is a beautiful sort of symmetry to the fact that his rookie years came right after Sandy Koufax’s last year with the Dodgers. Koufax, a Brooklyn kid, started out his career with the Brooklyn Dodgers. He left when they left for Los Angeles, and had his greatest years there. But back in New York, there was this right-handed kid, a kid from California, who became the right-handed kid for the New York Mets. One Koufax. One Seaver. If a baseball team is blessed by the baseball gods, it gets one like them.