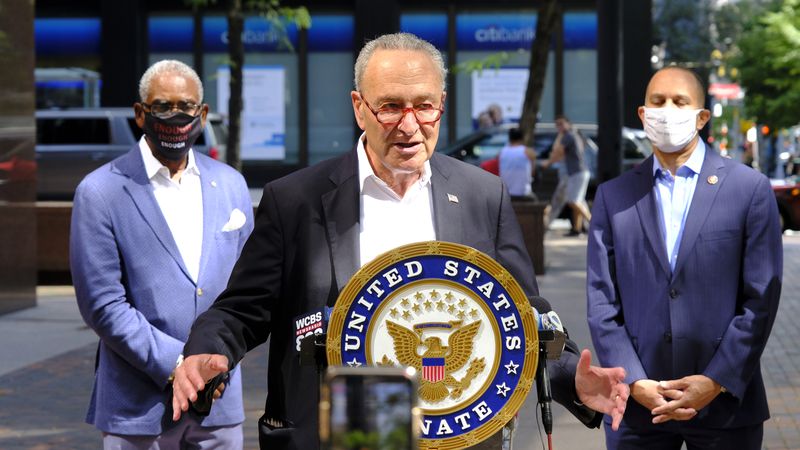 If Senate Republicans get their way, New York City will suffer an economic collapse of unprecedented proportions, Democratic members of the Big Apple’s congressional delegation said Monday, as they railed against a scaled-back coronavirus stimulus plan proposed by the GOP.

The GOP bill, which Senate Majority Leader Mitch McConnell (R-Ky.) plans to put up for a vote this week, wouldn’t provide any bailouts for state and local governments or budgetary aid for public transportation agencies — shortcomings that would be particularly devastating for the five boroughs, Senate Minority Leader Chuck Schumer (D-N.Y.) said.

“The bill Leader McConnell is putting on the floor of the Senate this week on COVID is a dagger to the heart of New York,” Schumer said during a press conference with House Democrats outside his Midtown Manhattan office. “This bill seeks to rot the core of the Big Apple.”

Gov. Cuomo has pleaded for months that cash-strapped governments in the state will need at least $59 billion in bailouts to cover massive budgetary holes caused by the economy-crushing pandemic.

The MTA, which has been particularly hard-hit because of plummeting ridership, estimates that it alone needs about $12 billion in federal aid.

The Democrat-controlled House passed a $3.4 trillion stimulus bill in May that would have satisfied New York’s financial needs, but McConnell and his Republican majority have refused to consider that measure and are looking to pass legislation with a far smaller price tag.

Speaking alongside Schumer, House Judiciary Chairman Jerry Nadler called McConnell’s proposal “a sham” and noted that his chamber won’t consider it even if it passes the Senate.

“It is shameful that on a day that we celebrate Labor Day, a day when our nation traditionally pays homage to the struggles of the working women and men who built America, we have to be here to say: Mitch McConnell, shame on you,” she said.

Despite months of negotiations, Democrats and Republicans on Capitol Hill have made essentially no progress on coming up with a stimulus compromise that both parties can agree to.

Republicans argue that the $2.2 trillion stimulus plan signed into law in March provided plenty of aid, and that the next package should only put up some additional unemployment benefits, financial assistance for small businesses and direct payments to taxpayers.

Democrats counter that the government must continue to pump out trillions of dollars in aid, especially as public health experts fear that the virus could make a comeback in the fall.

Velazquez said Republicans are putting their own political careers in jeopardy by refusing to meet them in the middle.

“We have news for you, Mitch McConnell, the American people see through this political stunt,” she said. “They are not buying it.”