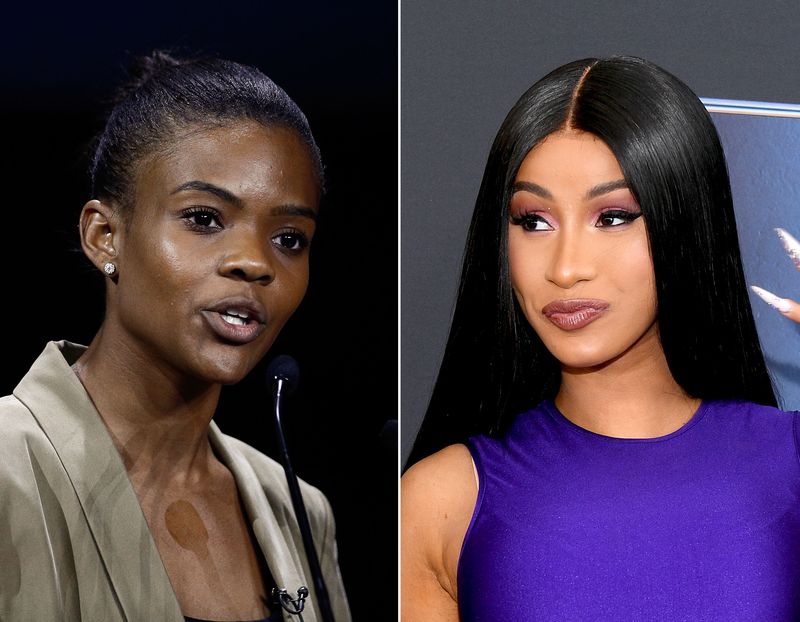 Cardi B and Candace Owens have been at a war of words on social media since Sunday night.

The back and forth reached a fevered pitch with the pro-Trump activist referring to the “WAP” rapper as “illiterate” and a tool for Democratic presidential candidate Joe Biden to pander to the Black community.

“It is one of the biggest insults. If Black Americans are not insulted by the fact that Joe Biden, who has been hiding in his basement, you know, for the entire year, made an appearance to come out because he was going do an interview with Cardi B. Do we have nothing better to offer?” Owens said during a clip of an interview with fellow conservative pundit Ben Shapiro she shared on Twitter.

The conservative pundit was referring to the recent Elle Magazine interview Cardi B conducted with Biden, where she spoke about her fears as a Black woman in America and how she’s already thinking about the safety of her 2-year-old daughter, Kulture.

Owens likened Biden doing an interview with the Atlantic Records rap star to Donald Trump being interviewed by Justin Bieber.

“[Joe Biden], you are pandering,” Owens chided. “You look at Cardi B’s Instagram, and you see she has millions of followers, and you think, ‘OK, this is an illiterate person, and if I appeal to this illiterate person’ … ‘They think she’s cool. She’s hip just by sitting here and taking this interview. Black people will vote for me.’ It’s basically saying, ‘Black people, you are stupid, you are dumb, and you are so foolish.’”

Cardi B, whose real name is Belcallis Marlenis Almanzar, is not one to back down from a fight.

In fact, she may even cause one.

Last year, the former stripper and reality TV personality was indicted on 14 charges, including two counts of assault with intent to cause serious physical injury.

In 2017, she caused a fracas with rap rival Nicki Minaj during a posh Fashion Week event at New York City’s tony Plaza Hotel.

Before her chart-topping and Grammy Award-winning success, the Bronx native, who is or was reportedly gang-affiliated, also engaged in physical skirmishes on the Mona Scott Young-produced Vh1 reality series “Love & Hip Hop: New York.”

Cardi B immediately fired back at Owens, letting her know that Biden should talk to her because even as a celebrity, her family members are being harassed by Trump supporters.

She referenced her sister Hennessy Carolina and her sister’s girlfriend getting into a verbal altercation with what she referred to as “racist MAGA supporters” during a recent visit to the Hamptons as an example of the lingering prevalence of racism and homophobia in the U.S.

“You wanna know why joe gotta talk to me Candice cause I have the #1 song & yet my sister can’t go to the beach in the Hampton’s wit out trump supporters harassing cause they were by themselves,” Cardi B tweeted.

She also noted how she has a huge platform and “can make millions go vote to get the MAN THAT USED YOU.”

“I don’t want to argue with you Candace I really don’t have the time,” Cardi B continued, adding, “I honestly just feel sorry for you.”

On Instagram, Owens continued her criticism of Cardi B, continuing to call her uneducated, ignorant and stupid: “You continually keep saying you have a Number One song—it means s—. Nobody cares about your song about your wet a– p—-y being number one,” Owens said.

“You’re way more likely to be killed by your husband than you are by a police officer,” the Right Winger said.

On Monday, the “Blackout: How Black America Can Make Its Second Escape from the Democrat Plantation” author rebutted Cardi B’s claims and called her a fraud.

Owens, who has 2.5 million followers, warned them not to listen to “a person that has a private security but wants to the public police defunded.”

On Monday afternoon, the almost-six-months-pregnant Owens continued her taunting by posting a superimposed meme of her in a Michael Jordan Bulls jersey dunking on the “Bodak Yellow” rapper with the caption: “I broke @Iamcardib.”

Owens rose to prominence in conservative political circles shortly after launching her RedPillBlack YouTube channel and website in July 2017.

The Stamford, Conn., native launched the Blexit movement in 2018 to encourage Black voters to leave the Democratic party.