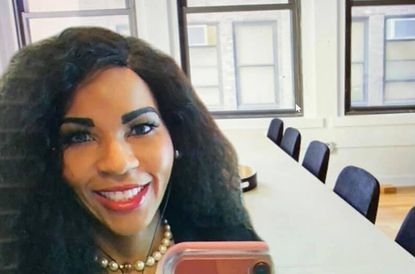 Texas officials have discovered a body at a lake where a missing beauty queen vanished two days earlier.

Lashun Massey, the 38-year-old reigning Mrs. Dallas, was last seen walking near Lake Lago de Claire in Irving between 5:30 a.m. and 7 a.m. on Tuesday, according to the Irving Police Department.

Her husband, Jeff, reported her missing when she never came home to get their sons ready for school.

Witnesses reported seeing Massey walking along the edge of the lake.

“They had asked her if she was okay and she said she was so they carried about their business,” firefighter Robert Keeker told CBS DFW.

“After that, they said they saw her exit the water and then we later received a tip someone else had seen her walking in the water again a couple hours later.”

A body was pulled from the lake Thursday morning by the Texas Department of Public Safety dive team, but has not been positively identified yet, according to the Irving Police Department.

She is scheduled to compete in the Mrs. Texas pageant in Corsicana, which begins Thursday and runs until Sunday.

Anyone who sees her or has information on her whereabouts is asked to call the Irving Police Department at 972-273-1010.

It’s unclear if foul play is suspected and a spokesman for the police department did not immediately return a request for comment.