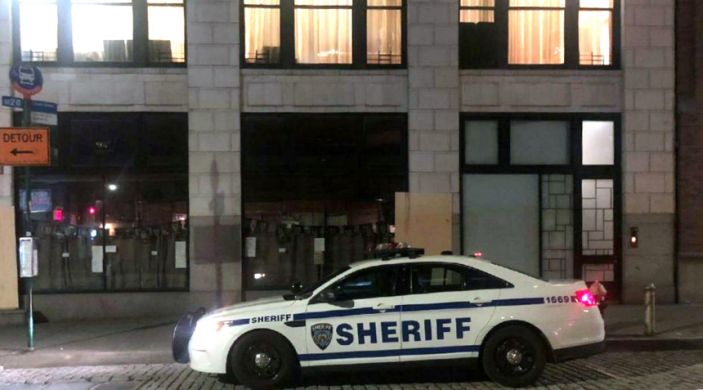 The tenants of a Tribeca apartment building turned their crib into an illegal, maskless bottle club that charged people $100 a head to party during the pandemic, according to a lawsuit by the building’s landlord.

The parties went on nearly every week on Hudson St. at Harrison St., angering neighbors with loud music, drunken behavior and trash littered everywhere, according to the lawsuit.

New York City sheriffs busted up the revelry twice, including on March 19, when they found about 120 unmasked revelers drinking and smoking weed, and a 17-year-old boy who officials say was “visibly intoxicated” when he took a tumble down a flight of stairs.

Tenant Kurt David was charged in the bust. He was sued along with Jean Elbaum-David in Manhattan Supreme Court on Tuesday.

Eisdorfer 69 LLC, the building’s owner, alleges that David signed a one-year lease for the second and third floors, but didn’t renew it when expired Jan. 31.

And over the past few months David and Elbaum-David turned the pad into a boozy nuisance with weekly parties, often advertised on their promoter’s Instagram account, the lawsuit claims.

“The scene Defendants have created appears to be that of a nightclub, causing the severe disturbance to last into the early hours of the morning,” the lawsuit alleges.

“These parties attract such a high-volume crowd that the Defendants have hired security guards/bouncers to operate the door when letting guests into the Premises.”