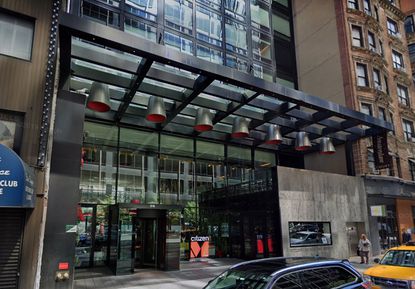 Word of Kayla Estevez’s violent death in a Times Square hotel came as no surprise to her heartbroken brother.

Estevez, 26, was strangled by her homeless boyfriend in Room 1214 at the Citizens Times Square Hotel on W. 50th St., with her body found early Wednesday morning, police said.

Murder suspect Ernest Wright, with a rap sheet of 14 prior arrests, was charged with the brutal killing.

“I literally told my sister, ‘You’re going to die the way you’re living your life,’” Estevez’s older brother Michael Estambul told the Daily News on Thursday. “And you say it, but you don’t think it’s ever going to happen … My mom is destroyed.”

Wright, 28, initially told police that Estevez suffered a fatal seizure. But an autopsy by the medical examiner determined that the victim was beaten and her larynx was crushed, cops said.

According to Estambul, his sister struggled with bipolar disorder for the last decade and started her doomed relationship with Wright in the last two years. Estambul recalled a prior beating by Wright so violent that his sister suffered a seizure.

“He took advantage of every single situation,” said the 30-year-old brother of the victim. “He’s a huge manipulator. He gave her so much attention, and it was the wrong kind of attention.

Wright was charged with murder and drug possession Thursday pending his arraignment. The suspect has 14 previous arrests, including busts for robbery, grand larceny and a prior domestic incident with another woman, police said.

He was arrested in February 2020 for beating his elderly father inside the victim’s Manhattan home, with the victim cutting off all contact with his namesake son about six months ago.

“I had to put him out of my house,” said dad Ernest Wright Sr., now 77. “He jumped me in bed in the middle of the night … He was kicking me with those steel-toed boots. It still hurts me a little bit.”

Like Estambul, dad Ernest Wright was not surprised by what happened: “No, because of the drugs. He’s into heavy drugs. And he’s doing many at the same time.”

Last October, Estevez showed up at her mother’s Harlem apartment with her boyfriend — who kicked in the door and refused to leave, police said. Estevez’s brother said he paid Wright $100 to leave after police said they couldn’t force the interloper to get out because Estevez wanted him to stay.

Her brother said Estevez was in no shape to deal with her abusive boyfriend due to her medical condition. The victim’s family tried to offer Estevez emotional and financial support, but she always returned to Wright, said Estambul.

“My sister gets assistance from the government, and he would use her debit card to pay for hotel rooms, to pay for drinks,” he said.

“I didn’t even know she was with him. But I literally asked him, I told him, ‘Can you please just leave my sister alone?’ And he always says, ‘Yeah, I’ll give her the space.’ And then in a week or so, they’re back together.”

He recalled his lost sibling as an “amazing person” who took ballet classes, loved to draw and wrote poetry about her condition.

Estambul said the police and local hospitals ignored his repeated calls for help about his sister’s diagnosis and her dangerous boyfriend.

“No one pays attention,” he said. “My sister was my best friend.”