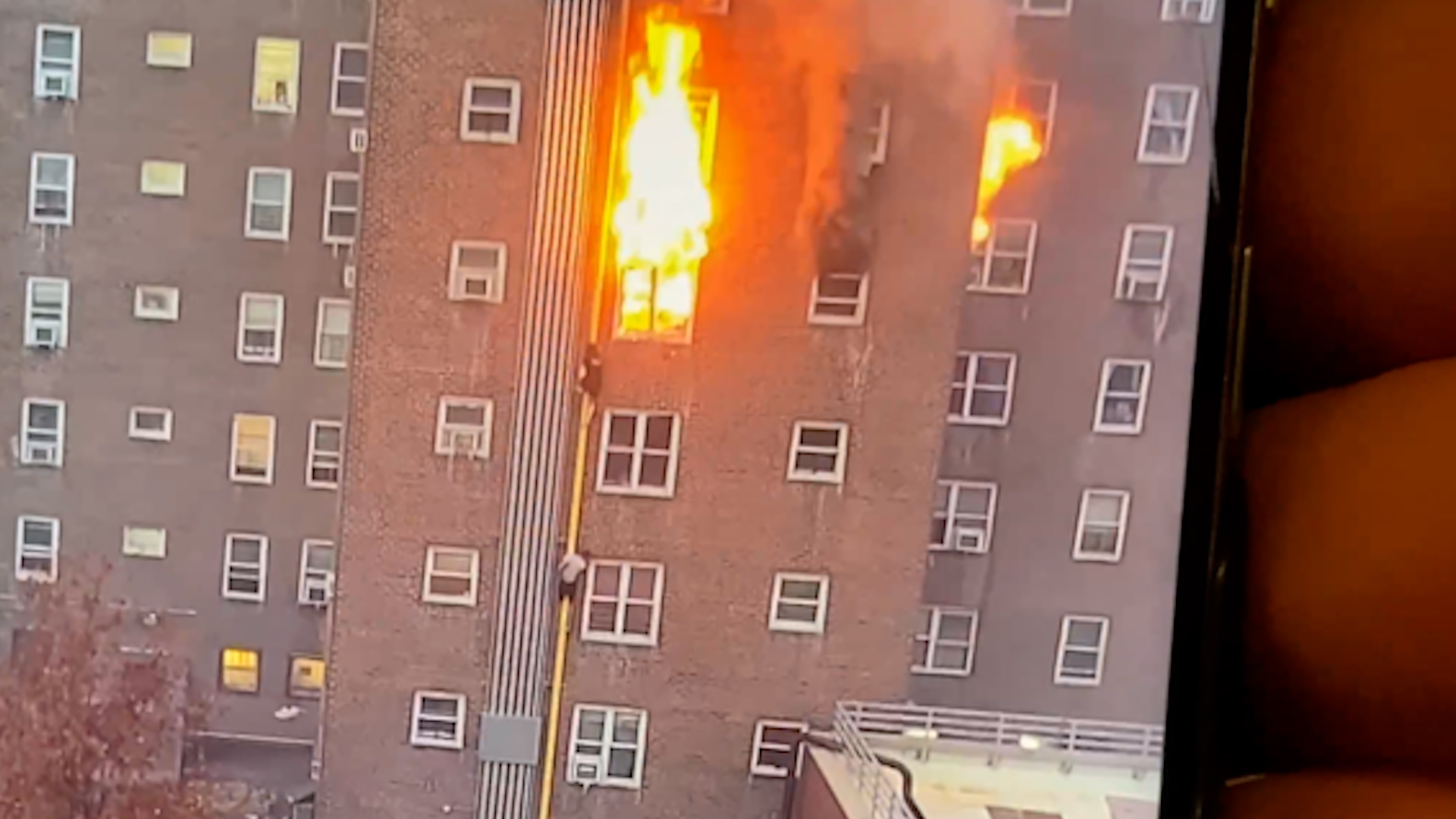 A pair of death-defying East Village teens, in a miracle descent from their family’s apartment turned inferno, shimmied four stories down a slender pipe to escape a blaze that left one man dead.

A neighbor’s dramatic video captured the terrifying scene as the brother and his older sister, with flames raging and black smoke billowing only a few feet above their heads, climbed out a window early Thursday and worked their way into the waiting arms of an anxious crowd gathered below.

The body of an adult man was found inside the apartment and an adult woman was left fighting for life after the 7 a.m. blaze inside a home in the Jacob Riis Houses that had a number of e-bikes inside, authorities said.

Neighbors described the woman as the children’s mother, and the dead man as her boyfriend.

“It was terrifying,” said eyewitness Christian Cortes, 20, who captured the great escape on his cell phone. “I was praying to God for them to get down safe. She grabbed that pole and she was looking like she was going to let go.”

Neighbor Shala Coleman was among those waiting on the ground outside when the 18-year-old girl made it to safety after 42 harrowing seconds, arriving 17 seconds after her 13-year-old brother made it down the piece of electrical conduit.

“Her skin was off her arm, peeling,” Coleman recalled. “I just put her in the blanket. Me and a police officer carried her to the benches.”

Both teens were taken to New York-Presbyterian Hospital Weill Cornell in stable condition for treatment with a 46-year-old woman listed in critical condition at the same facility.

Neighbor Shaquane Mitchell said she was among those trying to break down the apartment door as the family’s mother screamed for help.

“We tried to kick in the door,” she recounted. “She couldn’t unlock the door, the mother. She was yelling ‘I can’t get it open!’”

The FDNY arrived to find some apartment residents pressed against their fourth-floor windows in the 14-story building, with 180 firefighters bringing the fire under control after about an hour, said Assistant FDNY Chief Michael Ajello. Bright orange flames were shooting from the window as the sky filled with smoke.

The man killed in the blaze became the third NYCHA building fire fatality over a grim 28-hour stretch. The official cause of the latest fire remained under investigation, but Cortes recalled seeing someone hurling bikes out a window from the the burning residence.

Officials confirmed there were multiple electric bikes inside the apartment and police were later seen taking more e-bikes from the residence.

The deceased victim “fixed bikes,” said Ada Feliciano, 68, a next-door neighbor. “She was showing me her Christmas tree and I said ‘why do you have so many bikes?’”

He didn’t live in the apartment, but he visited frequently, she said.

“The room was filled with bikes,” Feliciano said. “I said, ‘God forbid there should be a fire. How would you get out?’”

Fire officials have reported 93 fires caused by lithium bike batteries this year, more than double the 2020 total of 44, with 73 injuries and 4 deaths. Experts blame outdated manufacturing standards on replacement batteries.

The fatal fire in the Riis Houses was the fourth citywide since Wednesday.

A 66-year-old Bronx man died after a fire inside NYCHA’s Butler Houses on Webster Ave. in the Bronx. Firefighters discovered the victim after extinguishing the 1:38 p.m. blaze Wednesday. His name was not immediately released.

Medics rushed the victim to BronxCare Health System, where he died. FDNY marshals determined the fire was caused by careless cooking, and there was a working smoke alarm in the victim’s apartment.

Earlier Wednesday, a pair of fires in Brooklyn and Queens killed an elderly couple and a 27-year-old man just 45 minutes apart.

Shamel Babb was found dead Wednesday inside his third-floor apartment at the NYCHA Brevoort Houses in Brooklyn after a 3:45 a.m. blaze where his mother’s desperate rescue attempt was repelled by thick smoke and fire.

That fire was also sparked by careless cooking, the FDNY revealed Thursday. There was a smoke alarm in the victim’s apartment but it was not operational.

The other fatal fire killed an elderly Queens couple, with 81-year-old Edgar Perez and his spouse Margoth, 75, found unconscious and unresponsive inside their Flushing fourth-floor apartment around 4:30 a.m.

On Thursday, the FDNY determined the Queens blaze was sparked by overloaded or faulty extension cords. There was no smoke alarm inside the couple’s apartment.

“These are open investigations,” a NYCHA spokeswoman said of the three fatal fires. “Please reach out to FDNY for more information.”