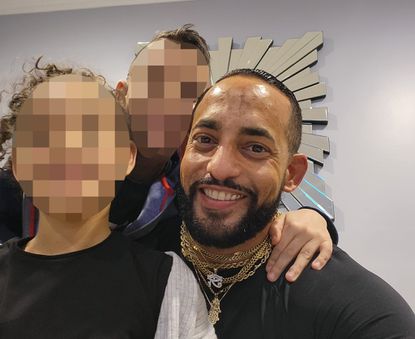 A Staten Island dad was fatally shot by a pair of crooks during a home invasion robbery early Thursday, police said.

The robbers got inside the three-story home on Hinton St. in Arden Heights about 1:30 a.m.

The victim, identified by neighbors and police sources as Tamer Shaarawy, 38, was shot in the left shoulder during a confrontation with the intruders.

Shaarawy was rushed to Staten Island University South Hospital, where he died. The crooks ran off but not before their images were captured by a neighbor’s surveillance camera. They have not been caught.

“The cops have been in and out of my house all night,” said the neighbor, who asked his name not be named.

“Two guys walked up to the house, went in,” he added, describing what his footage shows. “They were there for three to seven minutes. The gun was fired and then they came running out of the house.”

It was not clear if the robbers got away with any of the victim’s belongings.

Shaarawy was a weight-lifting buff who posted videos of his workouts on Facebook.

On Tuesday, he posted a photo of himself and his two young children, beaming for the camera, captioned “ALL I NEED.”

About a dozen of his relatives gathered at a house around the corner, several of them weeping as they sat outside.

“It’s not a good time, we’re not going to give a statement,” said one woman.

Shaarawy’s neighbor said his father owned two successful businesses in Staten Island’s Port Richmond neighborhood and his brothers lived nearby. He was shocked that deadly violence would visit such a quiet block on Staten Island’s typically sleepy South Shore.

“It’s never happened in this neighborhood. I’ve been here 27 years. There was a shooting when we first moved here… this is the second incident now,” he said. “It’s horrible. I don’t like it. It’s horrible, 100%.”

Another neighbor, Maria Dubovic, described the victim as a “pillar on our block.”

“He was the guy who watched everyone’s kids,” said Dubovic, 40, recalling how Shaarawy once helped her move a 500-pound treadmill into her home. “He was the most helpful neighbor there is.”

As detectives investigated, neighbors on the tight-knit block navigated the police tape, all of them on a first-name basis with each other.

“We don’t even lock our doors in this neighborhood,” Dubovic said. “It’s like your typical American dream.”

Shaarawy’s killing is the first homicide in Staten Island’s 123rd Precinct since 2019. The precinct has seen 10 robberies so far this year. Two of them were home invasions, one on Nov. 5 on Winant Place in Charleston and the other on Bloomingdale Road in Rossville, according to NYPD data.

Anyone with information of Shaarawy’s slaying is asked to call Crime Stoppers at (800) 577-TIPS. All calls will be kept confidential.