Teen dies after being shot in face on Lower East Side street; police seek suspects who ran off 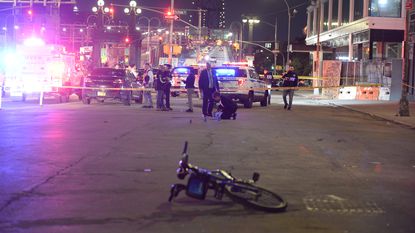 A 16-year-old boy died Friday night after he was shot in the face on a Lower East Side street near ramps leading to the Williamsburg Bridge, police sources said.

The teenager was shot near the intersection of Delancey St. and Suffolk St. around 8:30 p.m., cops said.

Sorwar Mahmudul, 32, who was working at a restaurant across the street, heard the shots.

“He was face up and a lot of blood was coming from his mouth. The cops were doing CPR but he wasn’t responding,” said Mahmudul.

“It’s sad — a shooting right here on the street. It didn’t look like he was going to make it.”

Medics rushed the teen, who was unconscious, to Bellevue Hospital but he could not be saved.

Shortly after, a 24-year-old man involved in the same shooting walked into Mount Sinai Beth Israel Hospital with a gunshot wound to the hip. He was transferred to an uptown hospital where he is expected to survive, police said.

Cops are looking for three men who fled north on nearby Essex St., police sources said.