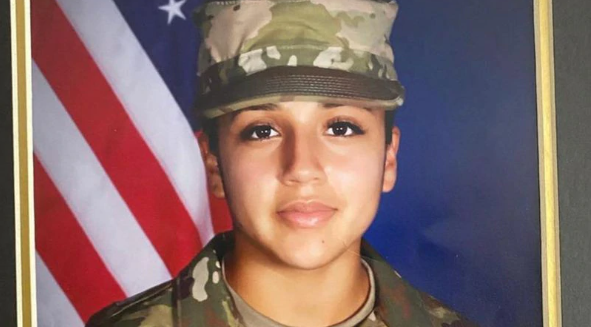 Police attempting to speak with a junior soldier in connection with the disappearance of missing Fort Hood soldier Vanessa Guillen witnessed his suicide instead early Wednesday.

Authorities found the suspect at 1:29 a.m. Wednesday, police told KTRK-TV in Houston, and as they tried to make contact with him, “he pulled out a gun and shot himself,” KTRK said.

The deceased soldier’s name was not released pending next-of-kin notification, Killeen police told KTRK. A civilian suspect arrested in the case of Guillen is the estranged wife of a former Fort Hood soldier who is now in custody, police said.

Investigators were still processing a scene where partial remains were discovered Tuesday, KTRK said. Her family believes it’s their missing relative, and while it’s not officially confirmed, one person involved in the case, Texas EquuSearch founder Tim Miller, a non-profit search-and-rescue organization involved in the search, told KTRK, “The search for Vanessa is now over.”

Guillen had been missing since April 22, and the Army has suspected foul play. The remains were found in a shallow grave on the evening of June 22, and the person’s identity was still being determined Wednesday.

The investigation is far from over, and involves special agents from the U.S. Army Criminal Investigation Command, U.S. Marshals, the Killeen Police Department and the Lone Star Fugitive Task Force, according to KTRK.