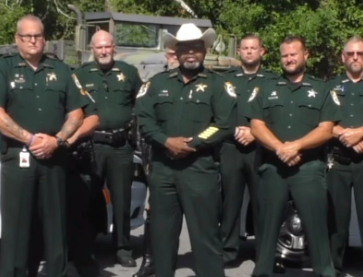 A controversial Florida sheriff on Tuesday said he would turn local gun owners into special deputies if the civil-rights protests sweeping the country in recent weeks turn violent across his county.

Darryl Daniels, Clay County’s first African American sheriff, posted a three-minute video on social media criticizing the Black Lives Matter movement and the mainstream media while warning that anyone who disrupts his community’s “quality of life” would be met with force.

“Yes, we’ll protect your constitutional rights as long as you remain under the umbrella of peaceful protest or peaceful march, but the second that you step out from under the protection of the constitutional, we will be waiting on you and we will give you everything you want — all the publicity, all the pain, all the glamour and glory,” he said, while standing in front of nearly 20 male deputies.

“And if we can’t handle you, you know what I’ll do?” Daniels continued. “I’ll exercise the power and authority as the sheriff and I’ll make special deputies of every lawful gun owner in this county, and I’ll deputize them for this one purpose: to stand in the gap between lawlessness and civility.”

The first-term Republican sheriff, who is under state investigation and faces six challengers in an upcoming election, did not cite any examples of violent protests in the suburban Jacksonville county or mention any specific threats of violence against the community.

The Florida Department of Law Enforcement is investigating an alleged affair Daniels had with a fellow officer when he worked at the Jacksonville Sheriff’s Office, according to First Coast News. He’s also accused of having that woman falsely arrested.

One of his political opponents, Atlantic Beach Police Chieif Michelle Cook, described his latest video as a taxpayer-funded campaign stunt.

“What Daniels said yesterday may sound tough and macho,” she told News4Jax. “But instead, it is a call for vigilantism and another signal that he is incapable of leading the Sheriff’s Department and keeping Clay County safe.”

Daniels said in the video that his message was “absolutely not” a threat, but a commitment to keeping his community safe.

“That’s what we were sworn to do and that’s what we’re gonna do,” he said. “You’ve been warned.”