‘Get it together, people’: de Blasio lashes out at Occupy City Hall protesters 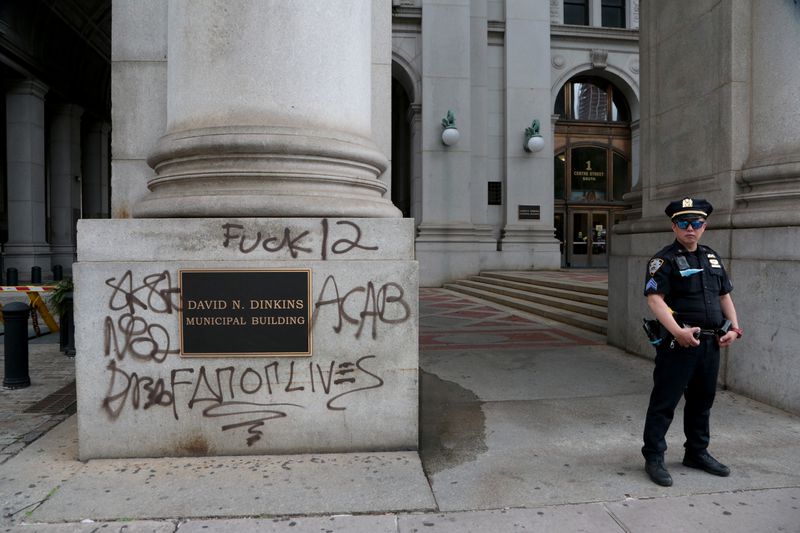 A day after three people were arrested outside City Hall, Mayor de Blasio says his patience is wearing thin with protesters camping out there.

Since demonstrators began assembling in the city’s civic center about a week ago, two government buildings have been defaced with graffiti, and at least one man was captured on videotape being arrested.

In the days leading up to the Tuesday night budget vote, protesters wrote graffiti on the David N. Dinkins Municipal Building on Centre St., named after the former mayor and a de Blasio mentor, as well as the Manhattan Surrogate’s Court building.

The mayor added that while respecting peaceful protest, he also needs to keep the city running.

“We’ll figure out, as always, how to strike that balance,” he said. “Wherever there is protest, we’ll work to make sure it is safe and peaceful.”

De Blasio said Wednesday the graffiti is “unacceptable” and “inappropriate,” adding that only peaceful protest would be tolerated.

His remarks came around the same time a new video posted on social media showed a protester attacking a TV reporter just steps from City Hall.

The video of the confrontation did not offer any clues as to why it began.

“Why are protesters in front of city hall attacking photographer and reporters if we are there to tell your story,” wrote Marvin Hoffman on Twitter. “This kind of ridiculous behavior is how messages get lost.”

Protesters began targeting City Hall last week with demands that the city cut $1 billion from the NYPD’s budget in response to police brutality and the handling of demonstrations over the death of George Floyd, a black man who was killed after a Minneapolis police office knelt on his neck for more than eight minutes.

The mayor and City Council passed the city budget last night after weeks of deliberating over its outcome. It projects more than $1 billion in cuts to the NYPD, though critics say the reductions amount to nothing more than bookkeeping sleight of hand.