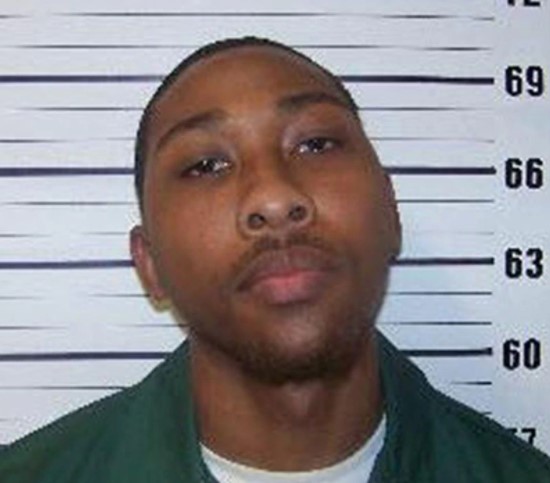 A Harlem ex-con, cleared in a 2012 murder with help from an act of God, now faces new charges in a cold-blooded Harlem assassination during this year’s pandemic summer, authorities said Tuesday.

Freddie McGrier, 30, was arrested Monday for the June 28 slaying of Devin Campbell, who lived only a block away from his alleged killer, according to cops.

McGrier was acquitted in the earlier homicide after crucial NYPD evidence was destroyed by Hurricane Sandy, crippling the prosecution’s case.

“I can’t believe they let that happen with the evidence from the other murder,” Campbell’s outraged uncle Dale Campbell said Tuesday. “It was murder followed by another senseless murder. . . He killed that poor kid, then he killed my nephew .”

“It doesn’t make sense,” he added. “(McGrier) should never have been out.”

Campbell, 32, was exiting his blue Mercedes-Benz outside the Grant Houses on W. 125th St. near Amsterdam Ave. just after 7 p.m. when McGrier allegedly opened fire. He shot Campbell 11 times, continuing to pull the trigger after the victim hit the pavement, prosecutors charge.

Nine years earlier, Bronx prosecutors charged McGrier as the cold-hearted gunman who killed Bronx gas station attendant Lamin Sillah during a fatal robbery gone wrong. But their case was undermined by Hurricane Sandy six weeks after McGrier’s arrest. The victim’s clothing — a key part of the prosecution’s case — was destroyed in the storm.

Without the DNA evidence from the clothes, the jurors were left only to consider grainy camera footage of the shooting. The suspect wore the hood of a New York Giants sweatshirt pulled over his head, making a positive ID difficult.

A Bronx jury needed only two hours and 35 minutes to acquit McGrier.

Sillah had been sending money to his family in Gambia. He was supporting more than a dozen people back home with his meager earnings.

“Lamin was only here eight months and he was killed in an instant,” said Sillah’s uncle, Ebou Cham. “It’s all been pain ever since.”

Karma had finally caught up to McGrier, he said.

“He believed he escaped, but God brought him back to us,” Cham said.

In the latest homicide, prosecutors say McGrier, wearing a face mask, blue baseball cap and Hilfiger shirt, left his apartment with his brother in tow and shot Campbell nearly a dozen times. McGrier calmly walked away after the shooting, according to prosecutors.

“I was sitting right there,” a witness, who wouldn’t give his name, told the Daily News at the time of the slaying. “He was face up, lying in the street dead. He was shot many times. It was crazy. It was in broad daylight.”

McGrier and his brother fled the scene of the slaying in a Honda, which authorities tracked to an apartment building in Edgewater, N.J., prosecutors say. Surveillance video allegedly showed the pair arrive at the apartment hours after the killing carrying suitcases. McGrier had changed clothes. His brother allegedly sported the same outfit he wore the moment McGrier opened fire.

Prosecutors say the murder capped a remarkable record of mayhem.

McGrier completed a two-year prison sentence for a Manhattan robbery on June 15, 2012. Three months later, he was accused of gunning down Sillah.

His time on the streets after the weather-aided acquittal of Sillah’s murder didn’t last. He was found guilty of attempted robbery and attempted assault in the Bronx four years later and spent another year behind bars, authorities said.

McGrier was out on parole on July 28, 2018 when cops arrested him for carrying a .22 caliber two-shot derringer pistol in a fanny pack full of weed as he played dice with friends on Amsterdam Ave., according to a criminal complaint. The feds charged him with being a felon in possession of a firearm.

While out on supervised release for that federal case, McGrier was arrested in May 2021 on state charges of weapon and drug possession, court records show.

Then on June 28 he allegedly shot Campbell to death. On July 6, U.S. marshals raided the Edgewater apartment where he was staying with his mother and brother. Prosecutors say they found a .38-caliber gun, two 9-mm magazines, forged documents and drugs along with the hat and sneakers they say McGrier wore when he killed Campbell.

On Monday, McGrier pleaded not guilty to Campbell’s murder in Manhattan Criminal Court. A judge ordered him held without bail. Prosecutors say McGrier has been disruptive in federal court, claiming he is a “sovereign citizen” who does not respect the court’s authority.

Campbell, himself convicted of attempted murder in 2011 and sentenced to eight years in prison, was working as a construction site flagman at the time of his death, relatives said.

“Devin was really generous with everybody. He grew up around here. He had a wife and a stepson. Everybody around here loved him,” said uncle Dale Campbell, 68. “He didn’t deserve this.”

Campbell and McGrier grew up together in the neighborhood, relatives said. The fatal shooting was the culmination of a senseless argument over Campbell giving high fives and fist bumps to people on the street.

“They started arguing, then fighting and my nephew got the best of him. Then (McGrier) started sending crazy messages about how he was going to shoot my nephew,” the uncle said.

“My nephew was trying to squash the beef. I told my nephew, ‘Be careful. Don’t you know this guys already killed somebody?’”

Dale Campbell says that his nephew had a gun in his bag because he feared for his life. But he didn’t get a chance to pull it out before McGrier allegedly killed him.

“His life was taken for some foolishness,” Dale Campbell said.

“My nephew will get justice,” the uncle vowed. “Hopefully (McGrier) will never see the streets again.”