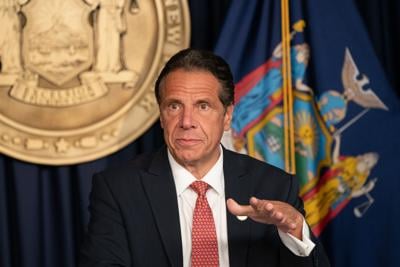 The Joint Commission on Public Ethics approved a resolution by a 12-1 vote reversing a decision made by staff last year allowing the disgraced governor to profit from his COVID-themed tome.

The decision comes amid allegations Cuomo used state resources and staff to help write and promote the memoir. The former governor has maintained that aides assisted him on a voluntary basis.

Members initially voted not to look back into the book deal and its approval. However, that changed as the commission’s chairman stepped down and Gov. Hochul appointed new members to the embattled ethics watchdog.

Last month, commissioners voted during a closed-door session to hire an outside law firm to “conduct an inquiry into the facts, circumstances, policies and practices” related to staffers granting the green light to Cuomo’s $5 million contract instead of the matter being put to a vote by the full board last summer.

William Fisher, a Cuomo appointee, was the lone vote against Tuesday’s revocation.

The vote means the ex-elected official will have to reapply for approval. If denied, he could face penalties and could even have to relinquish some of the millions in profit he’s already made off of the book.

In the spring, when he released his tax returns, Cuomo said he pocketed $1.5 million on the book last year. He donated $500,000 of that money to the United Way of New York State, and the rest was placed into a trust for his three daughters.

Publisher Crown announced in August that it would no longer print hardcovers of the book or issue a paperback edition after halting promotions back in March as harassment claims against Cuomo mounted.

Cuomo spokesman Rich Azzopardi slammed the decision, saying that members are “acting outside the scope of their authority and are carrying the water of the politicians who appointed them.”

Azzopardi repeated Cuomo’s defense that aides had volunteered their time to help out with the book and argued that legislative staffers often take time out from their day for campaign work and other activities.

“Our counsel’s request to JCOPE was clear, saying ‘no government resources’ would be used — consistent with that representation, people who volunteered on this project did so on their own time,” he said. “Furthermore, the governor cannot be held responsible for internal decisions over recusals and approvals made by JCOPE.

“They truly are a J-JOKE,” Azzopardi added.

Attorney Jim McGuire, representing Cuomo in relation to the book deal, said he will “look forward to vigorously contesting” efforts by JCOPE to enforce the decision.

Cuomo helped create the beleaguered ethics panel — long criticized for a lack of transparency and commissioners being too close to the former governor — in 2011 following the dismantling of the doomed Moreland Commission.

Lawmakers on both sides of the aisle as well as good-government groups have expressed frustration with the commission and have proposed overhauls that could reform or even potentially do away with the panel altogether.

Some legislators are pushing for a state constitutional amendment that would merge JCOPE with the legislative ethics commission and create a government integrity commission.