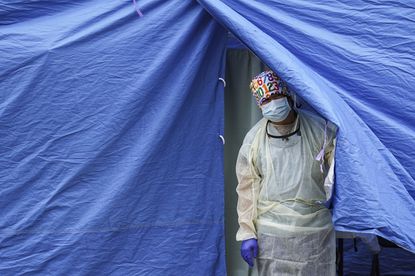 New federal data says 709,000 people applied for unemployment benefits last week — down from 6.9 million requests the week of March 28. The national unemployment rate was 6.9% in October, down from 14.7% in April.

New York City had 21,623 new unemployment claims last week — down from 143,798 in the week ended March 28. New York’s October unemployment data has not yet been published.

But surging coronavirus rates in the city and across the country — the number of new cases hit a record high of 892,321 in the week leading up to Thursday — may bring another wave of business closures and send the economy back into free fall, economists warn.

“The risk may be for more layoffs as coronavirus cases surge and some states impose restrictions on activity,” said Nancy Vanden Houten, an economist at the firm Oxford Economics.

New York, which since late April has largely contained the pandemic, this week found itself on the verge of a second wave.

Mayor de Blasio on Thursday said he was prepared to close schools across the city after partially opening them earlier in the fall — and Gov. Cuomo on Wednesday announced bars, restaurants and gyms would be forced to close at 10 p.m. starting Friday.

All of this could lead to another drastic spike in unemployment claims across the state and country, which in March were 10 times greater than the peak of the Great Recession in early 2009, data show.

But unlike March, people forced out of work by the pandemic won’t have the same government assistance to keep food on the table.

Congress at the end of July let lapse a federally-subsidized $600 weekly boost in unemployment benefits — and Democrats and Republicans have since March been unable to agree on a coronavirus economic stimulus package to keep the economy humming.

That’s forced many small business owners and their employees to choose between risking catching or spreading the virus at work or being unable to meet their basic needs.

Victoria Perez, 38, of Oakland, Ca., held two delivery jobs before the pandemic, but lost both of them when the west coast entered lockdown in March.

A cancer survivor, she’s now living subsidized housing with her children to avoid homelessness, and receives just $91 in unemployment every two weeks.

“The pandemic just ruined everything,” she said. “I was doing really good, and then nothing.”