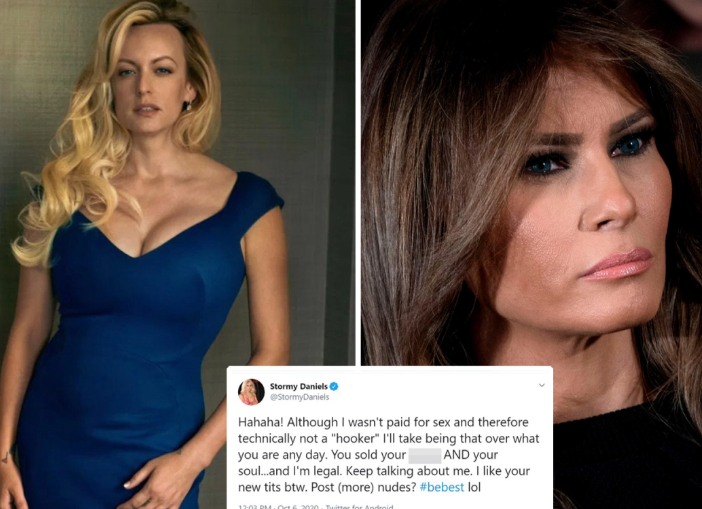 Daniels alleged in 2018 that she’d been paid to stay quiet about an affair she had with President Trump after Melania gave birth to their son Baron in 2006. She addressed the first lady’s remarks on Twitter Tuesday by implying it’s Melania who prostitutes herself by sleeping with the reality TV star-turned-politico.

“Hahaha! Although I wasn’t paid for sex and therefore technically not a ‘hooker’ I’ll take being that over what you are any day,” Daniels tweeted. “You sold your p—sy AND your soul…and I’m legal. Keep talking about me.”

Daniels also mocked steamy photos taken of Melania during her modeling days and signed off #bebest, which is the first lady’s initiative to improve the lives of children.

Winston Wolkoff played the recording on a podcast hosted by Michael Cohen, who was the president’s longtime lawyer before being sent to prison. He and his former boss subsequently had a nasty falling out. Cohen confessed to paying Daniels on Trump’s behalf. The president has denied his alleged affair with Daniels.

The first lady and the president said they tested positive for COVID-19 last week and are in the White House convalescing. The Trumps have been married since 2005.

Melania has not graced the covers of Vogue since becoming first lady, though former first lady Michelle Obama appeared on the fashion magazine three times while her husband was in the White House. Melania did appear in Anna Wintour’s glossy publication in her wedding dress when she became Mrs. Trump 15-years ago.