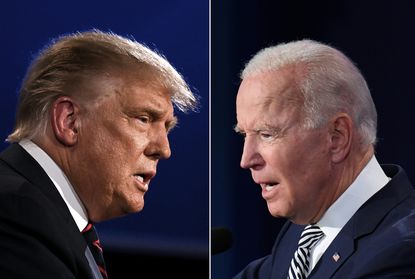 With the President on the mend, his opponent, Joe Biden, has blown open the 2020 race, according to a CNN poll released Tuesday.

A phone survey conducted by a private research firm indicates 57% of those polled plan to cast ballot for the former vice president while only 41% of Americans want to see President Trump in office for four more years.

CNN reports the poll was conducted after last week’s chaotic presidential debate, which one of its anchors summarized as a “s–t show.” President Trump’s failing health may have also been a factor, the cable news network reported.

Following months of flouting safety recommendations by the medical community, President Trump announced Friday that he’d tested positing for COVID-19, which has killed 210,000 Americans. The heavily medicated president now says he’s on the mend and plans to hit the campaign trail with a month to go before Election Day. He also intends to keep his Oct. 15 date with Biden for a second debate in Florida.

CNN’s survey indicates that voters trust Biden over Trump by a margin of 59% to 38% to handle the pandemic that has found its way to the White House. Members of Trump’s inner-circle, including the first lady, are reportedly infected with COVID-19. That poll found voters also trusted Biden to be stronger than Trump on health care overall by that same margin.

On the topic of dealing with racial inequality, Biden topped the president by 26 points with 62% of respondents thinking the challenger was the better man for the job. Biden also fared slightly better than Trump on the economy, where 50% of respondents preferred the 77-year-old Democrat to the 74-year-old Republican, who was favored by 48% of those asked.

CNN, which the president consistently calls “Fake News,” said Biden’s favorability rating is at 52%, while only 39% of the 1,205 participants in its poll had a positive view of Trump.

In the past month, Biden has reportedly made significant gains among female voters, people of color, young voters and independents. CNN’s report notes that Biden’s gains don’t necessarily add up to losses for Trump, who remains popular with his base, which includes a growing number of white men without a college degree.

The poll was conducted by an independent research firm by telephone between Oct. 1 and Oct. 4. The president announced at 12:54 a.m. on Oct. 2 that he’d tested positive for COVID-19. That tweet has registered 1.8 million likes.

He’s been very active on Twitter since returning home from Walter Reed hospital Monday night, including a Tuesday afternoon tweet claiming the “fake news media” isn’t giving him enough credit for his efforts to resurrect the economy.

“All they want to discuss is COVID 19, where they won’t say it, but we beat the Dems all day long, also!!!” Trump wrote.