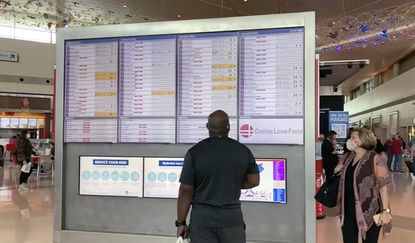 Southwest Airlines canceled more than 1,000 flights this weekend, ruining the plans of thousands of pandemic-weary travelers.

But irate, stranded passengers flooded social media with speculation about pilots’ resistance to vaccine mandates, while the pilots’ union said that wasn’t happening.

Southwest was top of the list of canceled flights for Sunday, with China Eastern coming up at 12%, with 270 cancelations, and third runner-up American Airlines canceling 143 flights, or 4%. In total, 1,356 flights had been canceled “within, into or out of the U.S.,” Flight Aware calculated.

“ATC issues and disruptive weather have resulted in a high volume of cancellations throughout the weekend while we work to recover our operation,” Southwest said in a tweeted statement. “We appreciate your patience as we accommodate affected customers, and customer service wait times are longer than usual.”

ATC issues and disruptive weather have resulted in a high volume of cancellations throughout the weekend while we work to recover our operation. We appreciate your patience as we accommodate affected Customers, and Customer Service wait times are longer than usual. (1/2) pic.twitter.com/o1scQJ5lLb

Southwest said many of the cancellations had stemmed from FAA activity on Friday.

“We experienced significant impact in the Florida airports yesterday (Friday) evening after an FAA-imposed air traffic management program was implemented due to weather and resulted in a large number of cancellations,” the airline said in a statement. “We are working hard behind the scenes to minimize challenges and fully recover the operation as we take care of displaced crews and customers as quickly as possible. We will continue to reset our network today and hope to return to close to normal operations as we move into Sunday.”

But the FAA said its actions were not substantial enough to disrupt air traffic to that degree.

“No FAA air traffic staffing shortages have been reported since Friday,” the FAA said in a statement. “Flight delays and cancellations occurred for a few hours Friday afternoon due to widespread severe weather, military training, and limited staffing in one area of the Jacksonville Air Route Traffic Control Center.”

The FAA noted that scheduling challenges had likely been carried over as pilots and crew were out of place.

While it’s true that pilots are pushing back against the vaccine mandate, the Southwest Airlines Pilots Association union said its members were not slowing down, walking out or failing to show up for work.

“SWAPA is aware of operational difficulties affecting Southwest Airlines today due to a number of issues, but we can say with confidence that our Pilots are not participating in any official or unofficial job actions,” the union said in a statement. “Our Pilots will continue to overcome SWA management’s poor planning, as well as any external operational challenges, and remain the most productive Pilots in the world. They will continue to be focused on their highest priority — safety. SWAPA Pilots are true professionals and will always maintain the highest level of responsibility to their crews, their passengers, and our airline.”

SWAPA has asked a court to temporarily block the company from imposing President Biden’s vaccine mandate, but it’s within a larger context of a dispute over alleged U.S. labor law violations, Bloomberg reported Friday. The COVID vaccine requirement is one of many unilateral actions that Southwest has taken of late that SWAPA alleges violates terms of the Railway Labor Act governing relations between airlines and their unions.

“The new vaccine mandate unlawfully imposes new conditions of employment, and the new policy threatens termination of any pilot not fully vaccinated by December 8, 2021,” said the legal filing, obtained by Bloomberg. “Southwest Airlines’ additional new and unilateral modification of the parties’ collective bargaining agreement is in clear violation of the RLA.”

Southwest said vaccine mandates do not fall under the rubric of changing job conditions and that its goal was to “continue navigating the challenges presented by the ongoing pandemic.”