Sheldon Silver back at home after serving less than 1 year of corruption sentence; prosecutors opposed the move 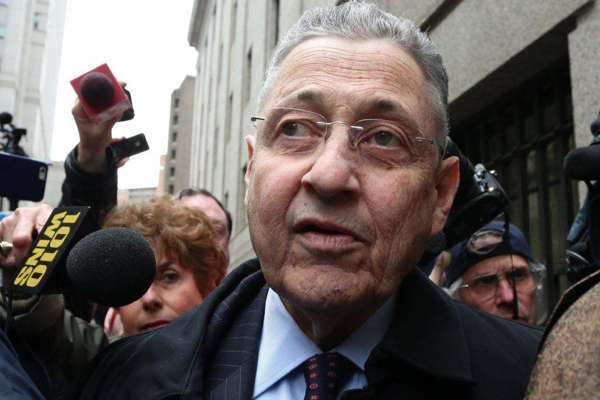 Corrupt ex-Assembly Speaker Sheldon Silver returned home to the Lower East Side on Tuesday, appearing frail and gray as he entered his apartment complex in a wheelchair after spending eight months and eight days in an upstate federal prison.

Silver, 77, was released by the federal Bureau of Prisons over the adamant objections of prosecutors amid claims that he is in poor health.

He arrived at his longtime home in the Hillman Housing Co-op on Grand St. at 5:10 p.m., clad in sweats and a gray baseball cap as he was pushed along a wheelchair ramp into one of the complex’s buildings.

“He is stoked to return,” Homnick added.

The Bureau of Prisons allowed Silver to exit Otisville prison in Orange County while it considers if he can serve the remainder of his 6½-year sentence on home confinement, The Associated Press reported, citing a source.

“BOP has authority to transfer inmates to their home on furlough for periods of time while they may continue to be considered for home confinement designation,” an agency spokeswoman said.

The agency has been moving some inmates to furlough in an effort to get those expected to serve home confinement out of jails and prisons sooner.

Multiple sources have told the Daily News that Silver is in poor health. Homnick said Silver is ailing and deserving of home confinement.

“Getting out of prison is always in the right direction,” said Homnick. “Right now his family is going to focus on getting his health back.”

Congress granted the Bureau of Prisons leeway during the pandemic to spring prisoners at heightened risk of death due to coronavirus. Silver, because of his age and nonviolent corruption crimes, falls squarely into the categories of candidates for home confinement under Prisons Bureau policy.

“I said to him it was great to have him back,” Homnick said. “And he said, ‘Thank you.’

“He seemed to be in good spirits. He wasn’t super smiley, but I’m sure inside he’s ecstatic and thrilled to be out.”

Some of Silver’s most outspoken critics declined to criticize his release.

“I know my constituents like to see justice done, and I think justice has been proven,” said state Sen. James Tedisco (R-Schenectady). “If he’s seriously, seriously ill, he should probably be with his family.”

In January, when former President Donald Trump was reported in the final days of his administration to be considering pardoning Silver, Tedsico tweeted that it would be “one of the worst travesty (sic) of justice ever!”

Amid complaints from Republican and Democratic politicians, Trump left office without taking action on the matter.

Silver left prison the same day it emerged that another crooked Albany politician, former Assemblyman William Boyland Jr., has been transferred to home confinement after serving six years of a 14-year sentence for bribery and corruption.

Silver was sentenced last year for secretly taking $800,000 in legal fees from real estate developers from 2005 to 2015. Silver faced two trials — a jury’s first guilty verdict was overturned on a legal technicality — and unsuccessfully appealed all the way to the Supreme Court.

His neighbors and fellow members of the Lower East Side’s Jewish community are mostly happy to have Silver back home, said Homnick — who saw his prison sentence as “harsh.”

“We are focusing on the positive things he did for the community. He did a lot of good and we are going to focus on that,” Homnick said.

As Assembly speaker, Silver was for decades one of the “three men in a room” who decided major New York State government policies in secret. The other two men who set most important policy are the governor and the Senate majority leader.

He begged Judge Valerie Caproni last year to spare him time behind bars.

“Your Honor, I do not want to die in prison,” he wrote.

“The time has come, Mr. Silver. You need to go to jail,” Caproni said.

The judge declined comment Tuesday through a courthouse administrator.