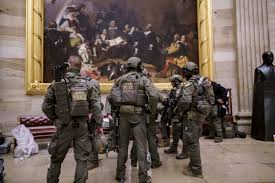 The Senate kicked off Donald Trump’s unprecedented second impeachment trial Tuesday by affirming the constitutionality of the proceeding itself after Democratic prosecutors used graphic video montages and tearful personal anecdotes to press the case that the former president must be convicted of inciting last month’s deadly attack on the U.S. Capitol.

In an early rebuke of Trump’s defense strategy, six Republican senators joined all 50 Democrats in voting 56-44 to confirm he can stand trial despite being out of office. That officially makes Trump the first ex-president to face an impeachment trial, in addition to being the first chief executive to get impeached twice.

Louisiana Sen. Bill Cassidy — who voted no when the Senate considered the same question last month — flipped this time, joining fellow Republican Sens. Mitt Romney of Utah, Susan Collins of Maine, Ben Sasse of Nebraska, Lisa Murkowski of Alaska and Pat Toomey of Pennsylvania in deeming the trial constitutional and allowing it to proceed.

Still, the remaining 44 Republicans voted no, signaling there likely won’t be enough GOP support to meet the two-thirds threshold required to ultimately convict Trump of instigating the Jan. 6 attack, which left five people dead, including a police officer.

The rigid Trump loyalty in the GOP ranks remained despite an emotional first round of arguments from the nine House impeachment managers prosecuting the case.

“What our country experienced that day is the framers’ worst nightmare come to life,” Colorado Rep. Joe Neguse, one of the managers, pleaded with senators sitting as trial jurors in the same chamber that was overrun by a violent mob of Trump supporters a few weeks ago.

At the outset of the debate, Maryland Rep. Jamie Raskin, the lead impeachment manager, played a terrifying 13-minute video montage of the assault on a large screen.

Attackers were seen breaking their way into the Capitol, assaulting police officers, smashing windows and ransacking the historic building — all while disrupting the congressional certification of President Biden’s election.

Portions of the falsehood-filled speech Trump delivered outside the White House before the attack were intercut throughout the montage to drive home the point that he’s responsible for what happened.

“If you don’t fight like hell, you’re not going to have a country anymore,” Trump was seen in the video telling thousands of his supporters, many of whom went on to storm the Capitol.

When the video ended, the Senate chamber fell dead silent.

“You asked what a high crime and misdemeanor is under our Constitution,” Raskin told senators, breaking the silence.

“That’s a high crime and misdemeanor,” he said, pointing to the screen. “If that’s not an impeachable offense, then there is no such thing … We just saw it in the most astonishing way. We lived through it.”

Trump, who faced his first impeachment trial in 2020 for pressuring Ukraine’s government for political favors, did not offer any statement Tuesday.

When his time to speak came, Bruce Castor Jr., Trump’s lead defense lawyer, offered a meandering argument for why the Senate should deem the trial unconstitutional.

First, he said Trump and anyone representing him will always “in the strongest possible way denounce” the rioters — even though the ex-president’s first reaction to the assault was to post a Twitter video in which he professed his “love” for the “very special” attackers.

Castor then claimed Trump’s incendiary Jan. 6 speech was protected by the First Amendment and dared the Justice Department to arrest him if Democrats truly believe he committed a crime.

“You go and arrest him, so there is no opportunity where the president of the United States can run rampant in January at the end of his term and just go away scot-free,” said Castor.

David Schoen, Trump’s other attorney, dialed it back a bit and argued the Constitution does not permit the Senate to put ex-presidents on trial. “A former president can no longer be removed from office,” he said.

But the managers are forging ahead because a conviction would allow the Senate to separately vote to bar Trump from holding public office again.

Moreover, the managers pointed out precedent for trying ex-government officials — the most notable case being that of William Belknap, President Ulysses Grant’s war secretary, who faced an impeachment trial in 1876 after resigning amid corruption allegations.

“Belknap made the exact same argument that President Trump is making today — that you all lack jurisdiction to try him,” Neguse told senators.

Neguse said senators at the time were “outraged.”

“They knew it was a dangerous, dangerous argument with dangerous implications,” Neguse said. “And that’s why, in the end, the United States Senate decisively voted that the Constitution required them to proceed.”

A pivotal moment came when Raskin broke into tears while recalling running for cover with his daughter, 24, as the pro-Trump mob breached the Capitol.

“I promised her it would not be like this again the next time she came back to the Capitol with me. You know what she said? She said, ‘Dad, I don’t want to come back,’” said Raskin, whose only son died from suicide on New Year’s Eve and was buried on Jan. 5. “Of all of the terrible, brutal things that I saw and that I heard on that day, and since then, that one hit me the hardest … Senators, this cannot be our future. This cannot be the future of America.”

Cassidy, the Republican who helped affirm the trial’s constitutionality, cited Raskin’s presentation as a motivator for his change of heart.

The trial resumes Wednesday with more arguments from the House managers.