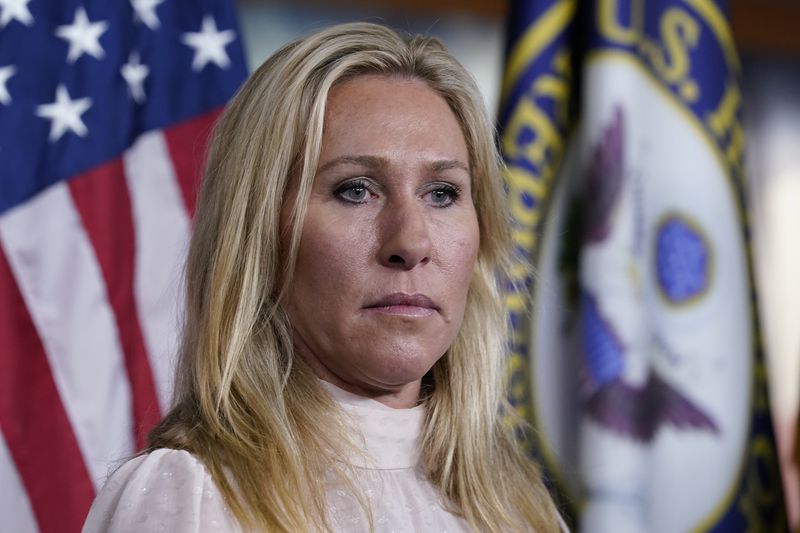 The Russian bear wing of the GOP is growling again.

MTG effectively put herself in the same camp as far right-wing colleague Rep. Madison Cawthorn (R-N.C.), who has harshly slammed Ukraine’s leader even as leads the fight against the Russian invasion.

“Do you agree with Madison Cawthorn that Zelenskyy is corrupt and that the Ukrainian government is corrupt?” Greene said, reading a question submitted by a participant in a Tuesday evening town hall.

“Yes and yes. That’s an easy one,” the lawmaker said.

The unfounded reference to “Nazi militias” echoes Russian propaganda that laid the groundwork for the invasion and ignores the Ukrainian president’s Jewish background.

I do not support:

Putin & his murderous war in Ukraine.

Neocons, Neolibs, or the Uniparty foreign policies that have spent trillions in senseless foreign wars.

I support the American People only and call for all of this to end.

Although they say they oppose Russian President Vladimir Putin’s invasion, Greene and Cawthorn were two of only eight House lawmakers to vote against imposing harsh new sanctions against Russia for invading its smaller neighbor.

The staunch supporter of President Trump called the measure a trick that would lead to American troops being sent into harm’s way to confront Russia.

Greene spoke at a recent conference of a white nationalist group at which a cheering crowd greeted her with chants of “Putin, Putin.”

Cawthorn even called Zelenskyy a “thug.”

Zelenskyy has unified the world behind the people of Ukraine as they bravely fight to repel the Russian invasion, which has deliberately targeted civilians. He won repeated standing ovations from Congress when he delivered a video speech last week.

Trump, who enjoyed a cozy relationship with Putin while in office, initially praised the Russian leader for his “very savvy” invasion but has since changed his tune, saying President Biden should take a tougher stand against Russia.