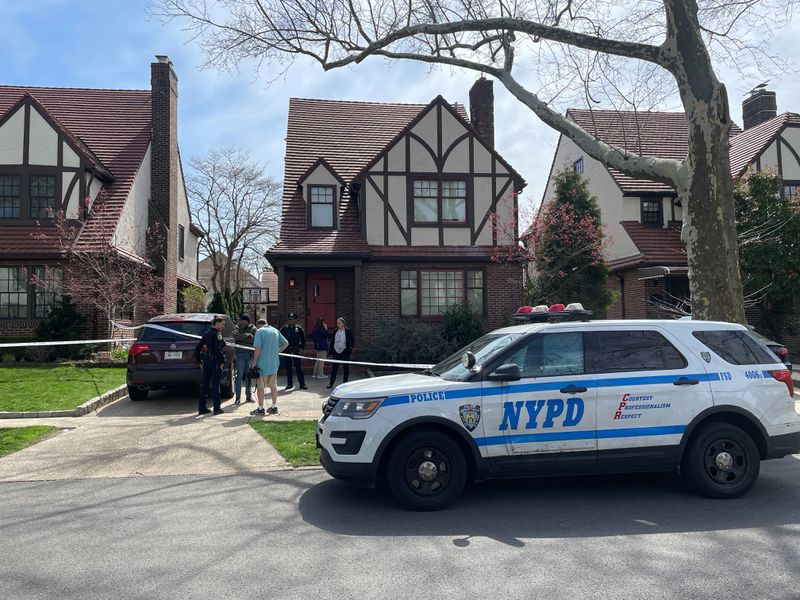 A Queens woman was found dead, stuffed in a duffel bag on city parkland a half-mile from her Forest Hills home, police said Saturday.

Orsolya Gaal, 51, was found about 8:10 a.m. Saturday by a sidewalk on Metropolitan Ave. near Forest Park Drive. The site is within the boundaries of densely-wooded Forest Park between Kew Gardens and Forest Hills.

Gaal had no ID on her, and was covered in blood, police said.

Police followed a trail of blood to her home a half-mile away, on Juno St. in Forest Hills, and officers made an “emergency entry” into the house, police said.

Inside the home, cops found Gaal’s 13-year-old son alone on the top floor. He told officers his mom lived in the house, but he didn’t know where she was. He was questioned in the case and released, police said.

Gaal’s husband, identified by neighbors as Howard Klein, was traveling out of state with the couple’s 17-year-old son, Klein’s Twitter account indicated. Police said Klein and his son were on their way back to New York.

Gaal attended a business school in Budapest, and her Facebook page suggests she had family in Hungary. Many of her pictures show her with her dog, and recount travels in Hungary, Croatia and Guatemala.

In February, she contributed to her 13-year-old son’s fundraiser for Susan G. Komen, a foundation that raises money for breast cancer research.

In a YouTube video posted in March, Gal’s 13-year-old son says he started the fundraiser as a bar mitzvah project to honor his paternal grandmother, who died in 2010.

“My grandmother Deborah Klein died after a five-year battle with breast cancer at the age of 76,” the teen says. “I was only 18 months old at the time, so I never really had the chance to know my grandma Debbie.”

Her husband’s online footprint suggests he grew up on Long Island and that he’s in the business of trading lithium, a metal used to make batteries. It identifies Klein as the founding partner of RK Equity, which LinkedIn says is a “New York-based boutique capital markets advisory firm.”

Early on Saturday, Klein tweeted: “Just landed Portland, OR before evaluating Ann Arbor again with my 17-year old son.” Ann Arbor, Mich. is the home of the University of Michigan, which Klein’s LinkedIn page says he attended from 1986 to 1990.

Neighbors were stunned by the police presence around the home of the family of four.

“It’s a complete surprise. It’s a quiet neighborhood. They were a regular family,” said John Blankson, a next-door neighbor. He said the family had been in the neighborhood about nine years.

A faint blood trail leads from the Juno St. home to a large blood spot on the sidewalk at the corner of Metropolitan Ave. and 75th Ave.

The blood trail followed a route someone might take walking from Juno St. to the spot where the woman’s body was found.

“Police put tape around that spot on the corner,” said a neighbor who declined to give his name. “They were testing it and swabbing it all morning.”

A Forest Park visitor who gave his first name, Jonathan, 30, said he was shocked to hear about the woman’s body being found by his normal walking path.

“We walk here on weekends usually. It’s horrifying,” he said.

Investigators were still looking into the woman’s cause of death, cops said.