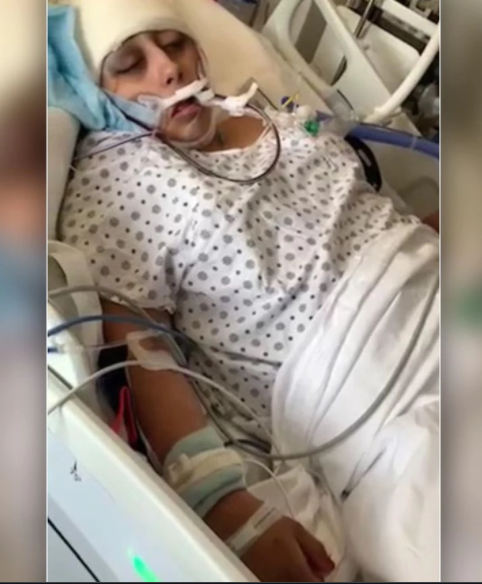 A Queens mom of six was pushed into the path of a moving car by her abusive boyfriend — cracking her skull in two places and putting her in a coma for several days, the victim’s devastated family told the Daily News.

Ayda Mayancela, 33, could face a year-long road to recovery after police sources said her boyfriend, Jorge Lazo, 31, on Friday pushed her in front of a Honda CRV going north on 108th St. and Roosevelt Ave.

Lazo remained at large Sunday while relatives said Mayancela remained hospitalized, struggling to communicate with loved ones from her bed at Elmhurst Hospital.

“She’s stable right now. She can move her hand,” said her sister, Jenny Saquipulla, 34. “She had four surgeries and she has a tube in her skull that is draining.

Mayancela can answer questions with head nods, the sister said, adding the injured woman suffered fractures on the back of her skull and the front of her head near her cheekbones.

“This is gonna be hard for her,” she said. “It feels like I can’t wake up from this dream.”

Another sister, Blanca Chavez, told The News she rushed to the hospital after getting a call from a friend.

“Jorge was there. He was nervous,” Chavez said. “I didn’t know what happened at first, I talked to him (Jorge).”

“She was unconscious. She was bleeding really bad. Her mouth, her nose,” Chavez added.

Lazo lived with Mayancela and her family, and after the horrific attack, he slipped away from the hospital and returned to their Queens home — where he tried to take their 4-month-old son with him, her sisters charged.

“That night, [Jorge] came to the house, he tried to come in,” Saquipulla said. “He said he wanted to take the baby. The second oldest (son), he said ‘No.’”

She said she’s frustrated Lazo is still on the run, especially since he was at the bloody scene when cops arrived. “We don’t know where he is,” she said. “I’m really upset about that, he was right there with the cops.”

Lazo and Mayancela moved in together in 2018, and fought often, she said. He was the father of her youngest child.

“They always have misunderstandings. They fight, he leaves and comes back a day or two later. He goes out drinking, living a free life.” Saquipulla said.

Lazo went by the nickname “Spider,” and was allegedly part of a gang, the sister asserted.

“I explained to her, drop that man,” Saquipulla said. “He was a piece of s**t, always.”

Police sources indicated Mayancela was also gang-affiliated, though it wasn’t clear if she was linked through her relationship with Lazo.

After the crash, Lazo tried to play off what happened as an accident, Saquipulla charged.

“He talked to my dad. He said he did push her, and that he doesn’t care what the cops see. He said it was an accident,” she said.

Meanwhile, Mayancela’s family wonder how they’ll be able to afford supporting her children: the oldest is 19, the youngest the 4-month-old infant.

“She’s the one who supports her children,” Saquipulla said. “She was strong. She did everything to look after her children.”

Members of the NYPD’s Community Affairs Bureau bought food for the family, but they’ll likely need more help in the coming months.

“[Her kids] need support in this moment,” Saquipulla said. “This treatment will take a year. We don’t know what’s going to happen next.”

“I hope my sister gets better and starts her life over,” she added.