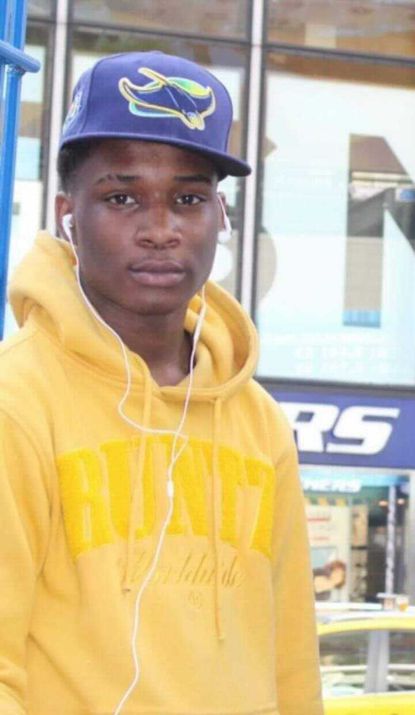 The mother of a Bronx teen shot to death by a pal who had just given him a hug says she tried to talk her son out of the treacherous gang life — and suspects his killer committed the murder as part of a sick gang initiation rite.

Cops investigating the slaying of 17-year-old Xavier Wilson shared with his mother surveillance video that shows her son sitting in front of a building near Union Ave. and E. 165th St. a little before midnight on Aug. 7, then rising to meet his friend.

“They hugged each other and he shot my son,” the 35-year-old mom told the Daily News Sunday. She asked that her name not be used for fear of gang retaliation.

“Xavier and this kid were friends,” she said of her son’s killer. “[Xavier] spent nights at his house many times. That mother fed my son. They didn’t have problems.”

On Thursday cops from the 42nd Precinct arrested Jose Gutierrez, 17, and charged him with murder, manslaughter and gun possession. He pleaded not guilty and is being held without bail.

Xavier was home eating a bag of chips when Gutierrez called and asked him to meet up, according to the victim’s mom.

“That boy called him back outside,” the mother said. “I had to watch in that video how my son sat in front of this building and waited for him. And as he was sitting there and waiting, I saw people sneaking around.”

“I really feel bad for this kid’s family, too,” she said of Gutierrez. “From the looks of the video it looked like the kid didn’t want to do anything. It was the pressure from the people in the dark shadows.”

“The one thing I don’t want to ever have to go through is losing my children to death,” she wrote. “I’ll lose it if I lose one of mines. That’s a pain I couldn’t dare live with. MY CHILDREN WILL BURY ME … NOT THE OTHER WAY AROUND.”

The mother said she tried to warn Xavier about the dangers of mixing with the wrong crowd.

“Xavier was a gang member not a gangbanger. I was aware of his being in a gang, you know, but I was also aware how it wasn’t for him because of the lifestyle they lived,” she said. “Xavier wasn’t into those kind of things.”

After getting an alert about 11:55 p.m. from the NYPD’s ShotSpotter gunshot detection system, police found the teen shot twice in his torso not far from the apartment in the Forest Houses, where his family once lived. EMS rushed him to Lincoln Hospital, but he could not be saved.

Wilson, who was born in the stairwell of his family’s apartment building before his mother could get to the hospital, had been a playful child who loved Spider-Man and dancing to Michael Jackson.

As he got older, transitioning from Middle School 233 to Frederick Douglass Academy III, Wilson struggled with learning difficulties. Though he seemed happy and had many friends, his mother started to notice some alarming behavior.

“It started out where he was posting on social media these new hand signs. I remember always telling him ‘What’s this you’re throwing up now? You’re a gang member?’ And he said ‘No, no, no, Mommy.’”

Eventually a relative told Wilson’s mother the truth about her son. She confronted him.

“I finally asked him one day and he told me, ‘Yeah,’” she recalled. “I started crying. And he said, ‘You acting like I’m out here killing and stealing.’”

The mother said the whole city needs to get involved in keeping kids on the right track.

“We need to get the community centers back open,” she said. “After school, what do [kids] do? If their parent is working and trying to make a living the kid just can’t be home alone.”

The night her son was killed, she returned to the family’s Wakefield home from a vigil for her half-brother, who had recently died of cancer. She found three bags of empty Doritos on her son’s bed but no sign of him and went to sleep worried about his whereabouts.

“I woke up to text messages that my son was shot,” she said. “Me and Xavier were just joking on Friday night, he was playing pranks on me.”

“He wanted lasagna Sunday night,” she added through tears. “I’m just numb. I’m numb. I haven’t lit a candle. I can’t face the reality of my son being gone yet.”