Queens baby watches in horror from car’s back seat as dad is pistol-whipped, shot by muggers 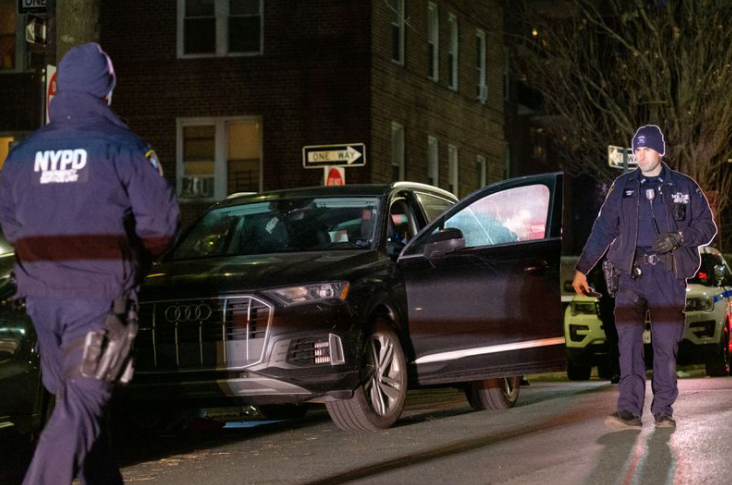 A 2-year-old boy watched in horror from the back seat as his father was pistol-whipped, shot and wounded behind the wheel of an Audi during a wild struggle with a pair of Queens muggers, police said Tuesday.

The chaos began when the dad pulled up outside his Forest Hills home on 72nd Road near 113th St. about 9 p.m. on Monday and two armed crooks wearing hoodies yanked open the doors and demanded his money and phone.

The dad’s wife and their 7-year-old daughter had just gone inside the home, cops said Tuesday, but the baby was still in the back seat.

The Audi is a rental the family used for a Florida trip to see relatives over the holidays, one relative told reporters. The family had just recently returned home to Queens when the dad was held up.

Refusing the crooks’ demands, the dad was pistol-whipped, then shot in the chest and arm during a struggle over his cell phone. The toddler was not hurt.

The wounded dad, his arm in a sling, returned home from Jamaica Hospital on Tuesday afternoon.

Neighbor Susana Kazimova, 34, was walking with her husband when she heard the shots.

They came upon the victim’s wife calling 911.

“We walked over and we saw the people saying, ‘Are you OK?’ ” Kazimova said.

The victim’s wife told police she had just brought their daughter inside and was going back out to grab the couple’s son when she witnessed the shooting.

“I was inside. I saw the two guys going inside the car,” the wife told The News on Monday night, cradling the 2-year-old.

The two crooks fled empty-handed and were last seen speeding away in a dark-colored sedan, police said. They have not been caught.

This level of violence is rare for Forest Hills. As of Dec. 26, the 112th Precinct, which protects the leafy neighborhood, did not have a single shooting all last year.

Cops counted 1,562 shooting incidents across the five boroughs last year, 30 more than in 2020.

Cops in the 112th Precinct saw a 9% jump in robberies in 2021, although the numbers were still relatively small compared with other precincts. As of Dec. 26, cops had investigated 59 robberies, five more than in 2020.

“It’s not good,” Kazimova said of the shooting. “This is the safest neighborhood you could ever imagine. Look what’s going on.”