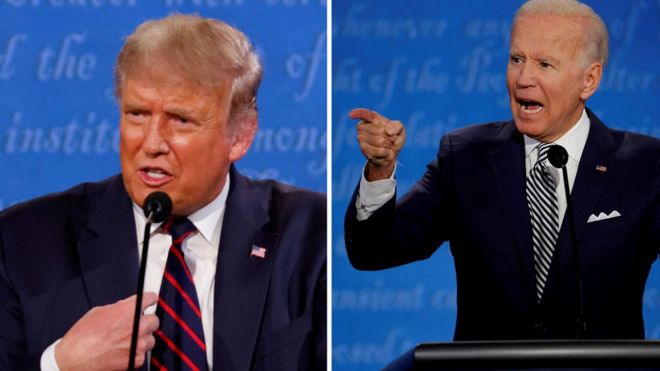 President Donald Trump has refused to take part in a virtual TV debate with his Democratic rival Joe Biden.

Earlier the commission deciding the 15 October Miami debate’s format said it would have to take place virtually.

It made the decision after Mr Trump was diagnosed with coronavirus. He was treated in hospital, discharged and has no current symptoms, his doctor says.

Mr Trump said the move to virtual was to “protect” his rival. Mr Biden’s campaign said he would participate.

The Democrat’s campaign said he “looks forward to speaking directly to the American people”.

But speaking to Fox Business Channel on Thursday, Mr Trump said: “I’m not gonna waste my time on a personal debate. Sit behind a computer, ridiculous. They cut you off… I’m not doing a virtual debate.”

The first debate had descended into insults and interruptions. US media used words like “chaos” and “ugly” to describe it.

The vice-presidential debate, held on Wednesday night between Mike Pence and Kamala Harris, was a far more measured affair.

The next 90-minute presidential event is due to be held at the Adrienne Arsht Center for the Performing Arts in Miami, with local residents in the audience posing questions to the candidates.

But the commission said candidates would have to take part “from separate remote locations”. Participants and the moderator would be in Miami.

The commission said the decision had been made “to protect the health and safety of all involved”.

The moderator is C-SPAN political editor Steve Scully. Mr Trump described him on Thursday as a “never Trumper”.

Mr Trump had previously said he looked forward to debating Mr Biden on stage and, on Monday, Mr Biden said he would share a stage with Mr Trump as long as medical experts gave the go-ahead.