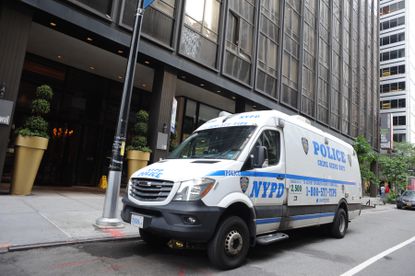 A plastic barrel found in suburban New Jersey with a nude, dead woman stuffed inside had been wheeled out of a Wall St. apartment building — and cops on Thursday raided a top-floor home where the woman was last seen, sources told the Daily News.

Neighbors say the 22nd-floor apartment cops swarmed at 95 Wall St. near Water St. in the Financial District often smelled of weed and bad air freshener, and that the men living there were nowhere to be found.

Police wearing ballistic vests broke down the door Thursday after learning that the 42-year-old victim — who was found Aug. 13 in a barrel at the corner of Hobart St. and Teaneck Road in Ridgefield Park, N.J., a few miles from the George Washington Bridge — listed the building as a residence, police said.

Sources identified the woman as Nicole Flanagan. An associate described her to detectives as an escort. She had previously been arrested for drug-related charges, sources said.

Neighbors, who didn’t give their names, said two men live in the apartment that was raided.

“They were OK guys. They would stop and talk. They were loud and would play hip-hop music but they seemed harmless,” he said. “You never know. One day they seem harmless, but one day you’re in a barrel in New Jersey.”

An autopsy found no obvious signs of trauma, and the medical examiner will need more tests done to determine the woman’s cause of death, the sources said.

The neighbor witnessed the raid at about 11:15 a.m.

“There was like a big noise and I heard, ‘Get down! Get down! Get down!’“ he said. “Not being afraid I just opened my door to see what was happening and there were eight policemen with guns drawn and they had pried the door.”

Another resident of the building, who also asked not to be named, said detectives on Monday reviewed surveillance video that showed a barrel being rolled out of the building.

The resident was on a Zoom call when police swarmed the 22nd floor apartment.

Another neighbor described blood spatters inside the apartment, and said the two men were home late Wednesday, but nowhere to be found Thursday.

“The cops missed these guys by a few hours,” he said. “I thought they were dealing drugs, but they were always riding skateboards. I just thought they were on the delivery end. Their apartment smelled like marijuana and bad air freshener. They always had some strange incense going.”

He said the men moved in with a woman about a year ago, but she’s since moved out. They weren’t on the apartment lease, the neighbor said.

Flanagan was a mother of three, said Ray Underwood, her ex and the father of her son.

“She had three beautiful children that adored her, and loved her, and you know, a family that loved her and cared for her but, you know, just lost touch,” he said.

Underwood, who lives in Connecticut, had scant interactions with her over the past decade, since he had custody of her child.

The Bergen County Prosecutor’s Office is leading the investigation into the woman’s death. Officials there did not return messages seeking comment Thursday.

Sources said an NYPD K-9 unit is expected to search the apartment for blood or other evidence in the next few days.