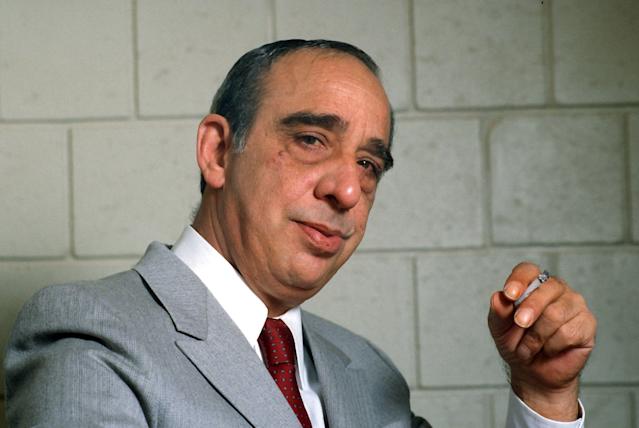 The Snake was a rat.

Colombo crime family boss Carmine “The Snake” Persico was a “Top Echelon Informant” for the feds, shocking new court papers reveal, adding a posthumous twist to the tale of an infamous gangster known for his ruthlessness and street smarts.

The revelation, which likely has implications for numerous Brooklyn mob cases, is contained in a government document from November 1971 listing members of a “Top Echelon Informant Program.” Persico’s name appears among those of four turncoat members of the Colombo family.

“I think it changes the entire dynamic of how this so-called Colombo war has been sold,” said attorney David Schoen, who submitted the document Wednesday in a Brooklyn Federal Court filing.

“I never wanted to disclose this document. I think it potentially puts people in danger.”

Ten people died in the city’s last major gang war, including an innocent teen killed at a Bay Ridge bagel store, as the Colombo factions battled between 1991-93.

The list emerged through a Freedom of Information lawsuit that pried confidential documents from the Justice Department. Schoen represents onetime acting Colombo boss Victor “Little Vic” Orena, who is 87 years old, senile and seeking compassionate release from prison. Schoen cited the stunning revelation as another reason to release the octogenarian gangster serving a life sentence, alleging his racketeering conviction was the result of FBI misconduct.

“There is no truth to this allegation and the supporting record is substantively worthless. Having served as Carmine’s lawyer, I can attest that he was not an informant nor did he provide information to the Government. Until this day, Carmine remains a giant among men, and I was honored to represent him in the many contentious legal battles he fought against the Government,” attorney Anthony DiPietro said.

In the popular narrative, Orena challenged Persico’s position atop the Colombo family around the early 1990s and sparked one of the bloodiest wars in mob history.

But Orena has long argued that Colombo turncoat Gregory Scarpa Jr. and his FBI handler, Lindley DeVecchio, set him up, fomenting the war with Persico.

“The ‘official boss’ of the Colombo family, on whose side Scarpa and DeVecchio were working, Carmine Persico, was himself, since decades earlier, in the government’s employ as a member of its ‘Top Echelon Informant Program,’” wrote Schoen.[More New York] Woman, 54, killed by stray bullets outside Brooklyn barber shop »

“This explains a great many events, both directly related to Mr. Orena’s case and otherwise.”

DeVecchio’s messy relationship with mob snitches has been cited by gangsters in court since the 1990s.

Schoen said that Persico’s cooperation made the Colombo “war” more of a one-sided “attack.”

“It seems like perhaps it was being orchestrated from the top,” Schoen said.

DeVecchio was even indicted by the Brooklyn District Attorney for helping Scarpa kill four people in the 1980s and 1990s, but the case fell apart and was dismissed.

The feds have acknowledged that Scarpa “lied” and “misrepresented” his involvement in murders during the Colombo civil war while also feeding them information.

Schoen said the Persico paperwork was such a game changer that he made an appointment with Justice Department Inspector General Michael Horowitz and other federal agents to confirm the documents were legit.

“They did not indicate they had any reason to believe it was anything other than what it purported to be or that any information reflected on it is inaccurate,” Schoen wrote.

Schoen acknowledged that the “top echelon informant” document left many questions unanswered. Persico does not seem to have benefited from his cooperation ― he died in prison in 2019 at age 85 while serving a 139-year sentence. Schoen noted that Persico’s son, however, had secured a plea deal recommending a sentence of around three years in 2017 despite a judge concluding that he participated in a murder.

The elder Persico took over the Colombo family after the 1971 shooting of boss Joe Colombo. He maintained control over the family despite frequent stints in prison, making millions through labor racketeering, gambling, loan sharking and drug trafficking around New York.

He was famously charged along with the heads of the other four crime families in the “Commission” prosecution led by then-Manhattan U.S. Attorney Rudy Giuliani.

Persico’s response was to propose putting out a contract on Giuliani’s life, though the other families disagreed.

Persico received a 39-year term in the first case. In the second, where he acted as his own attorney, Persico was hit with a 100-year term — ensuring his death behind bars.

Manhattan Federal Judge John Keenan described Persico as “one of the most intelligent people I have ever seen in my life” for his performance as a lawyer.

Persico’s attorney DiPietro said the Commission case was based on “false information” provided by Scarpa.

“This is ridiculous on its face. If this were the truth, Carmine Persico would have won compassionate release and not have died in prison like a dog,” DiPietro said.