Panic in Times Square as dozens flee from what sounded like gunshot; man hurts leg 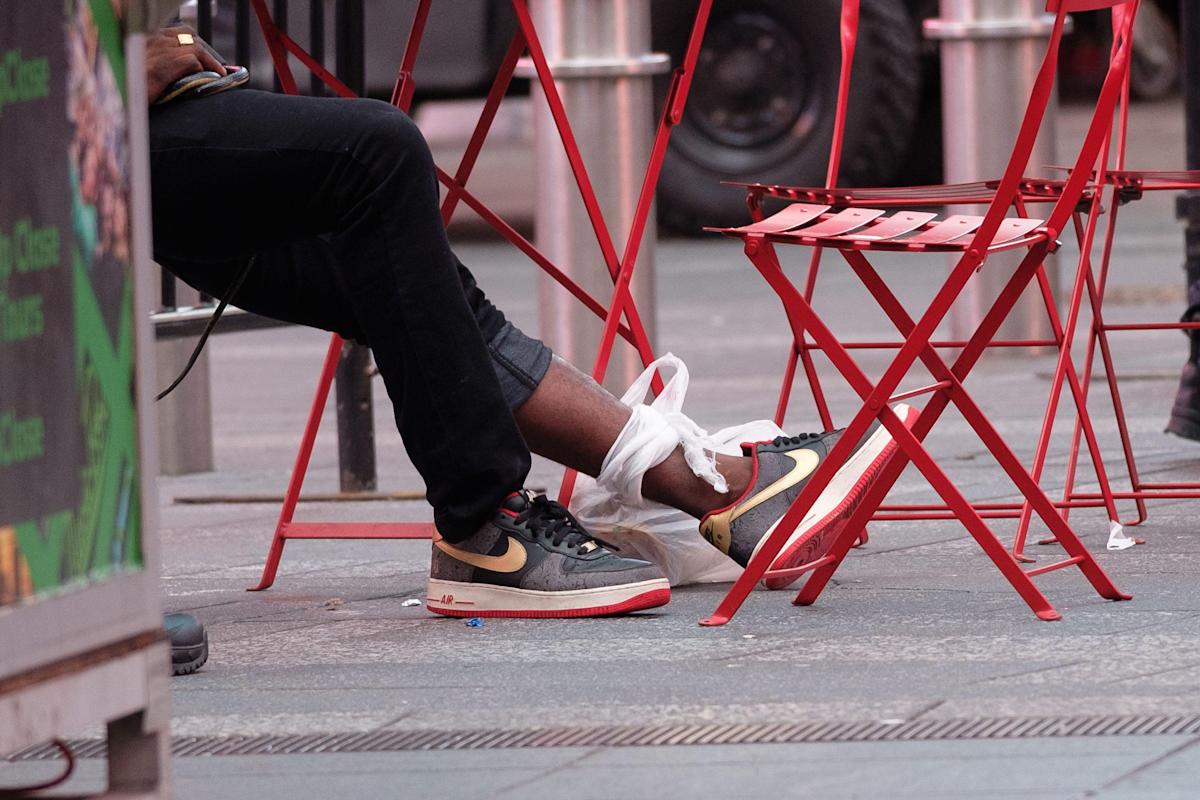 A wave of panic washed over the Crossroads of the World Sunday, with dozens of people fleeing what they thought was a gunshot.

A man hurt his leg in the chaos, but after an investigation police determined no shots were fired.

“I was right in the center of Times Square and we heard a pop. All the crowd over here came running,” said James Chesney, 24. “I ran down 47th and turned left, and saw like 10 cop cars come down here… There was only one pop.”

Chesney said he saw the hurt man running with the crowd.

At first, it appeared the man might have been grazed by a bullet, but cops determined it was not a gun wound after all, police said.

“He was saying he was shot, and we saw, he had a wound on him, like he was bleeding around his ankle,” Chesney said. “I was here since 5:30 (p.m.). He was fighting with cops, arguing, and they were investigating the whole situation.”

Chesney said he couldn’t tell what he heard, “but knowing how people panicked, you don’t see 300 people running unless it’s something serious.”

In a wild twist, the wounded man was later placed into police custody.

He then started struggling, leading a throng of cops to bring him to the ground.

Police initially said he was arrested for pot possession, then said he faces other charges, though the charges were pending.

Marijuana possession is now legal in New York state — and people are allowed to carry three ounces on them without breaking the law.

The tourism mecca has seen a surge of shootings, assaults and robberies as visitors have trickled back into the city since the height of the coronavirus epidemic.

“This is the gateway to the world. Imagine, the perception that shots were fired sent people into a panic,” said Republican mayoral candidate and Guardian Angels founder Curtis Sliwa, who said he rushed to the scene from Queens.

“We’ll see what it turns out to be. I’m sure the NYPD will get down to it. But the fact is, they gotta really crack down on Times Square,” he said.

That violence included a May 8 shooting cops said was sparked by a street vendor turf war at W. 45th St. and Broadway, where 4-year-old Skye Martinez and two other adults were hit by stray bullets.

On June 27 a teenage break dancer gunning for a rival blasted a bullet into the ground, at W. 45th St. and Seventh Ave., and it ricocheted and hit U.S. Marine Samuel Poulin, 21, in the back, wounding him. The teen surrendered to authorities.

On July 14, rapper Elijah Quamina, 20, of Brooklyn, sprayed several bullets at a motorcyclist in a fit of road rage at Seventh Ave. and W. 41st St., hitting no one, cops said. He was arrested the next day.

And on Aug. 17, a window at Times Square’s famous Broadway TKTS booth was struck by a stray bullet.

Police have responded to the violence by assigning 75 cops to patrol Times Square at all times , cracking down on the street hustlers.