Oscars snubs include ‘One Night in Miami’ and Chadwick Boseman 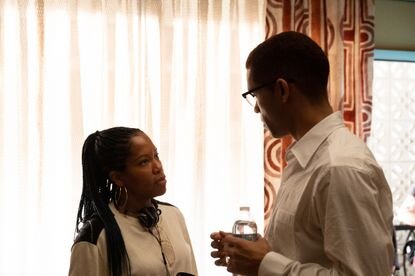 The 2021 Oscars nominations didn’t go according to script in several key categories.

The finalists for the film-focused awards show were announced Monday, with a few unexpected omissions sticking out as the nominees were unveiled ahead of the April 25 ceremony.

Here are the biggest snubs for this year’s Academy Awards.

“One Night in Miami”

The acclaimed drama envisioning a night of celebration and tension between Muhammad Ali, Malcolm X, Sam Cooke and Jim Brown received three nominations, but was surprisingly not included among the best picture finalists after being considered a heavy contender.

The film was the directorial debut of Regina King, who was left out of the best director race at the Oscars after being nominated for the honor at last month’s Golden Globes. Meanwhile, Thomas Vinterberg received a surprise nomination for best director for the comedy “Another Round.”

Leslie Odom Jr., who portrays Cooke in “One Night in Miami,” was nominated for best supporting actor, and his track “Speak Now” is up for best original song.

Many believed “Ma Rainey’s Black Bottom” to be a front-runner for a best picture nomination, making the drama’s absence in the category one of Monday’s biggest snubs.

The drama about a contentious recording session involving Rainey boasts a 98% fresh rating on the reviews website Rotten Tomatoes, and Viola Davis is up for best actress at the Oscars for her performance as the singer. Chadwick Boseman, who died last August, is nominated for best actor for his portrayal of a headstrong horn player.

The film itself, however, was not one of the eight movies to be nominated for the awards show’s top honor.

The two-time Oscar winner won the Golden Globe for best supporting actress last month for her work on “The Mauritanian,” but was not nominated in the category at the Academy Awards.

Inspired by a true story, the legal drama stars Foster as the defense attorney for a man from Mauritania who spent years at Guantanamo Bay without being charged after the U.S. government accused him of playing a role in the 9/11 attacks.

While Boseman is up for best actor for “Ma Rainey’s Black Bottom,” he was not nominated for best supporting actor for Spike Lee’s war drama “Da 5 Bloods” as many expected him to be.

Had he been selected by Oscars voters for both movies, Boseman would have become the first actor ever to receive two posthumous Academy Awards nominations in a single year.

Boseman was nominated for both honors at the Screen Actors Guild Awards, which take place next month.