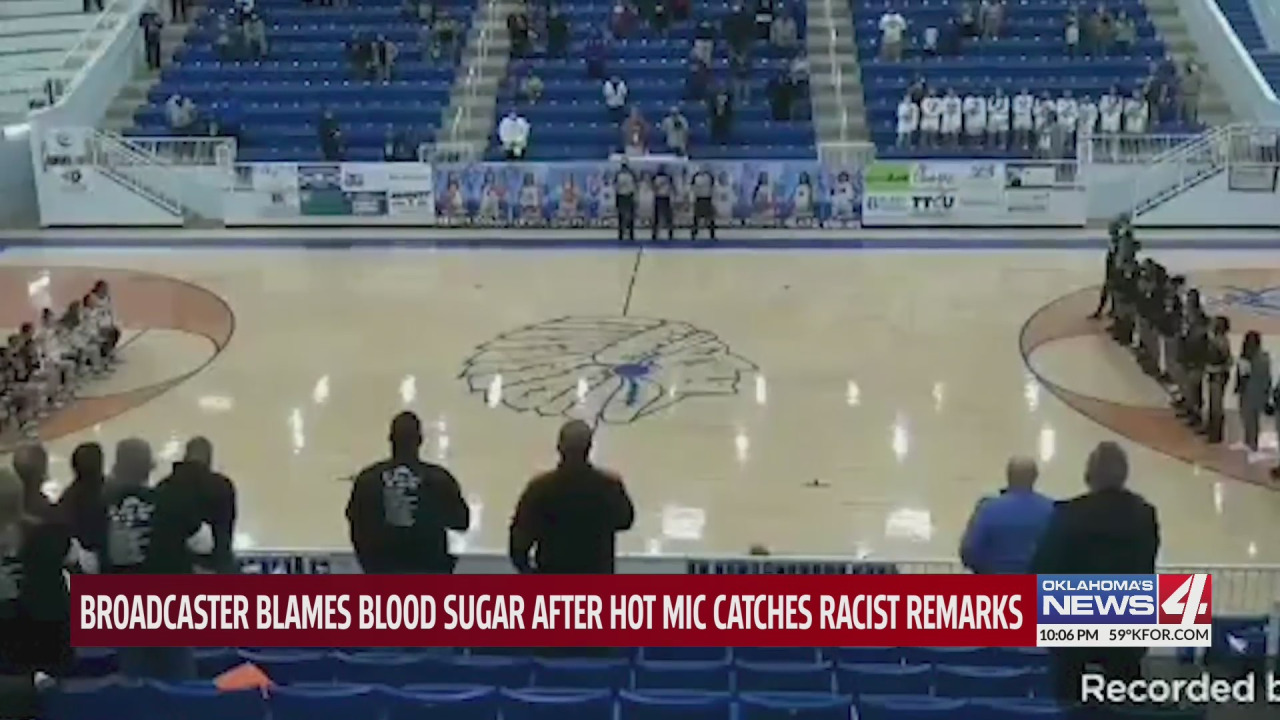 A broadcaster was caught on a hot mic using racial slurs directed at the Norman High School girls’ basketball team during a state tournament in Oklahoma on Thursday.

The hateful comments were recorded after members of the team kneeled for the national anthem, ahead of a game between Norman High and Midwest City High School in Sapulpa, Okla.

“They’re kneeling? F–ng n–rs,” one broadcaster can be heard saying in a short clip, which was later shared on Twitter by Norman High girls’ basketball coach Frankie Parks.

“I hope Norman get their a–s kicked. F–k them. I hope they lose,” he continued. “They’re going to kneel like that? Hell no.”

“Hey [NFHS Network] looks like you forgot to cut the Mic,” Parks wrote in a tweet accompanying the video, which went viral on Friday morning. “This is why they kneel,” he added in all caps.

The broadcaster who spewed the hate, Matt Rowan, originally denied it, but then ‘fessed up, bizarrely blaming low blood sugar.

“I made inappropriate and racist comments believing that the microphone was off; however, let me state immediately that is no excuse, such comments should have never been uttered,” Rowan said in a statement sent to The Frontier, a news website in Oklahoma.

“I will state I suffer Type 1 Diabetes and during the game my sugar was spiking,” Rowan wrote. “While not excusing my remarks, it is not unusual when my sugar spikes that I become disoriented and often say things that are not appropriate as well as hurtful.”

Nick Miglorino, the superintendent of the Norman Public School District, said that both announcers had been contracted by the Oklahoma Secondary School Activities Association.

After video of the incident was widely shared on social media, Migliorino released a statement condemning the broadcaster’s behavior

The school will “not tolerate the disgusting words and attitudes of these announcers,” he said.

“This type of hate speech has no place in our society and we are outraged that it would be directed at any human being, and particularly at our students.”

Emily Virgin, the state’s House minority leader, called for the dismissal of the presenters, in a case that she referred to as “heartbreaking.”

“I am absolutely disgusted by the actions of the broadcasters who used racist slurs against our Norman High basketball team,” she tweeted. “They should immediately resign or be fired. Our student athletes should be commended for their courage, not disparaged.”

The Oklahoma Secondary School Activities Association released a statement saying that the organization was aware that “some very offensive, inappropriate comments” had been made during the broadcast.

The NFHS Network also released a statement saying that it was “aggressively investigating the incident and will ensure that any individuals responsible will have no relationship with the NFHS Network moving forward.”

“We were sickened by the comments made last night at the start of the NFHS Network’s broadcast,” the network said.